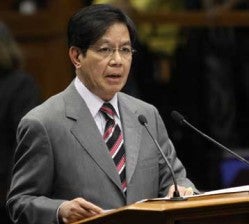 Senator Panfilo Lacson on Sunday insisted that businessman Roberto “Bobby” Ongpin be held accountable for allegedly a government bank for personal and financial gain regardless of who his backer was.

Lacson was reacting to Ongpin’s statement from abroad that he did not need the backing of anybody, even former First Gentleman Jose Miguel “Mike” Arroyo, to succeed in business.

“Whichever way it went, it was still committing the crime of taking advantage of power and influence to bleed one of the most reliable government financial—institutions—the Development Bank of the Philippines-that matters to the Filipino taxpayers,” Lacson said.

Arroyo, whom Ongpin has admitted is a friend, is being linked to Ongpin’s acquisition of P660 million in loans from the DBP and later using the proceeds to acquire DBP’s 50 million shares in Philex Mining Corp. at P12.75 each.  But Ongpin has denied that Arroyo had something to do with the loans.

“Maybe it was ex-FG Mike Arroyo who has depended on Mr. Ongpin’s business wizardry to earn their big bucks out of the power and influence that he wielded during GMA’s (Arroyo) presidency,” Lacson noted with sarcasm.

“Does it really matter? Hell, no. Cut the technicalities and technocratic gobbledygook,” the senator said.

Senate banks and financial institutions chairman Sergio Osmeña III also noted the “unusual speed” by which the loan applied for by Ongpin’s Delta Ventures Resources Inc. were approved in 2009, during a joint hearing with the blue ribbon committee on Friday.

“That is one of the elements of a behest loan—the unusual speed by which you approve (it),” he said in a news conference after the hearing.

On Sunday, Osmeña said the banks and financial institutions committee which he chairs and the blue ribbon committee did not link Arroyo to the loans Ongpin got from the DBP.

“That’s why we conduct the investigation, to ascertain the links, how the loans were acquired and at whose behest,” Osmeña said in a phone interview.

Osmeña also clarified that while he already noticed several “attendant circumstances” that tend to support suspicions that Ongpin’s borrowings constituted a behest loan, “that is just my personal observation.”

“We have to wait until all data is presented,” he added.