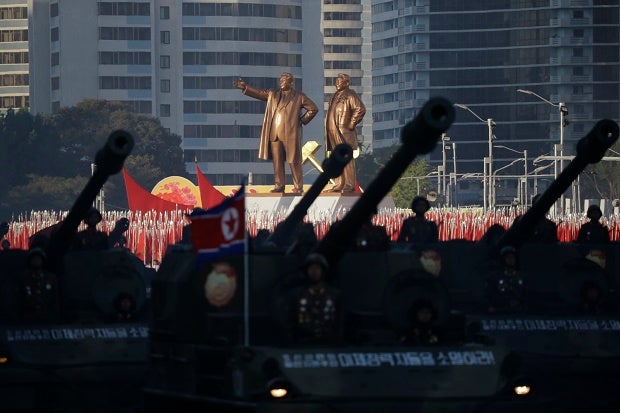 Statues of Kim Il Sung and Kim Jong Il stand above soldiers during a military parade in Pyongyang, North Korea, Saturday, Oct. 10, 2015. North Korean leader Kim Jong Un declared Saturday that his country was ready to stand up to any threat posed by the United States as he spoke at a lavish military parade to mark the 70th anniversary of the North’s ruling party and trumpet his third-generation leadership. AP

WASHINGTON — The United States won’t consider North Korea’s call for a peace treaty unless it abandons its pursuit of nuclear weapons and improves human rights, a senior US diplomat said Thursday.

Sung Kim, US special representative for North Korea policy, described Pyongyang’s proposal for negotiations on a treaty as “disingenuous.”

The North reiterated that demand last week and warned it would otherwise strengthen its nuclear deterrent. That was in response to President Barack Obama and South Korean President Park Geun-hye saying they were open to talks on easing sanctions if the North would negotiate on ending its nuclear program.

“Frankly I’m skeptical about their call for a peace treaty because I think they understand that we have some fundamental requirements,” Kim told a House foreign affairs panel.

“They would need to denuclearize, they would need to abandon their pursuit of dangerous delivery means, missile capabilities, and they would need to improve their human rights situation. I mean I cannot imagine any circumstances in which we would enter a peace treaty with a North Korea that continues to reject international obligations and commitments. They know that,” he said.

The Korean Peninsula is still in a technical state of war because the 1950-53 Korean War ended with an armistice, not a peace treaty. The US retains 28,500 troops in South Korea.

Lawmakers at the hearing called for the North to be designated as a state sponsor of terrorism. The designation was lifted in 2008 during negotiations on its nuclear program that stalled soon after.

“The (North Korean) government is doing everything it can to be a bad actor in the world,” said Republican Rep. Ted Poe.

Among the allegations leveled by Poe was that North Korean-supplied rockets had been used by fighters of the militant group Hamas against Israel, and that the North had provided material support to Hezbollah.

State Department officials said a designation requires a determination that a government repeatedly provided support for acts of international terrorism, and it continues review available intelligence on North Korea.