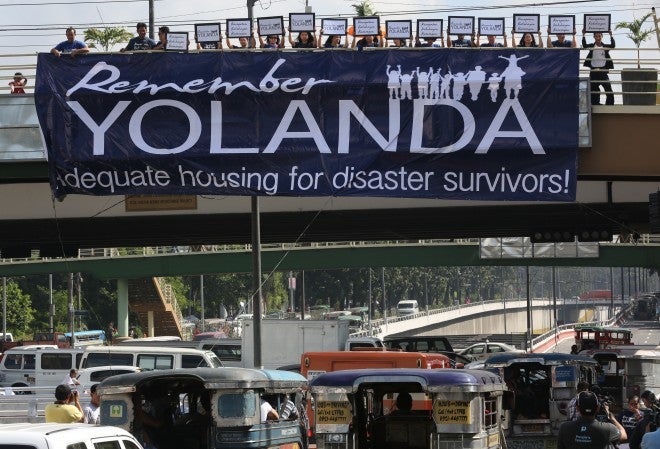 TACLOBAN CITY—How long should a temporary period be?

The government allocated more than P100 billion to efforts toward rehabilitation of devastated areas, and aid came pouring in for the survivors from local and international donors.

But the delivery of the promised help and relief seems to be moving slowly.

Among those waiting for permanent homes are survivors staying at the transitory site in Barangay Cabalawan.

At first glance, the community of temporary shelters, hosting 115 families, looks bucolic. The rows of nipa houses look orderly, the dirt roads are free of trash and flowers bloom in front of most of the shelters.

But while there are roofs over people’s heads, the community does not have a regular source of running water and electricity, though water is delivered to residents thrice a week and donors have given them small solar panels just enough to give them light at night.

Moreover, the Yolanda survivors do not feel completely safe in the wood-and-nipa homes, not after surviving the lashing winds and towering storm surges generated by Yolanda.

“It’s not safe here,” said Rhea Alaga, a 30-year-old mother of two who moved to the area in December last year.

One particularly windy day, a portion of the roof of her house was blown away, she said. Since her house is made of light materials, strong winds can easily topple it, she said.

Alaga was told that a new house in the resettlement site Ridge View  would be available to her by Oct. 15, courtesy of the National Housing Authority (NHA).

But the date has come and gone and she is still staying in the shelter.

She is ready and willing to pay the amount the government would require for the new concrete house, she said.

“This is temporary housing that seems to be becoming permanent,” said Sen. Francis Escudero, who dropped by the shelter site during his visit to Tacloban City on Thursday.

At a Senate hearing earlier this month, housing officials said less than one-tenth of the 200,000 houses that were supposed to be built for those affected by Yolanda had been constructed.

The delay was due to problems with land acquisition as well as the need to secure various permits to ensure the area was safe, they said.

Slow use of funds

Escudero said the government’s use of funds was part of the problem.

He said that when he visited Ormoc on Thursday, he also learned that emergency shelter assistance was still being given to Yolanda survivors. But the emergency has long been over. Two years is a long time, he said.

The amount is also not always given fully, he said. There were cases where it was paid in increments, he said. This was against the law and could be a case of malversation, he said.

As a senator, he said he wants to know how the administration—derided for underspending—used the more than P100 billion in funds allocated by Congress for the storm survivors.

“The national treasurer provided a certification that there were available funds for the P100 billion. Where is that? Why is it that our fellow countrymen seemingly do not feel the help from the government?” he said.

The funds should be spent on areas where these are needed, regardless of the political affiliations of local officials, he said.

Escudero also said the government should provide livelihoods for the survivors staying in permanent homes or temporary shelters.

Malacañang on Thursday disputed reports that the government had not done enough for the survivors of Yolanda.

“Let’s understand that the devastation done by Yolanda was so extensive,” Coloma said at press briefing.

“By other countries’ experience, two years is not enough to deal with all the needs of the affected families,” he said.

Coloma insisted that the administration was doing its best to improve services for the survivors of Yolanda.

He said complaints like lack of basic services and emergency shelter assistance would be dealt with the government agencies concerned.

Earlier, the United Nations rapporteur on human rights of internally displaced people said the Philippine government had not done enough to help the storm survivors.

In a statement posted on the UN website, Chaloka Bayani reported that nearly two years after Yolanda, thousands of survivors remain in shanties without power or water supply.

Many storm survivors have had to endure relocating to evacuation camps some up to three times since Yolanda struck on Nov. 8, 2013, she said, noting the substandard housing leaves them vulnerable to future typhoons.

“While the government is to be commended in terms of its immediate responses, its attention for ensuring sustainable durable solutions for internally displaced [people] remains inadequate to date,” Bayani said.

Bayani was in the country in July to check on the government’s handling of rehabilitation efforts for the survivors of Yolanda.

Yolanda, the most powerful storm to hit land, wiped out entire communities in Eastern Visayas, leaving 7,350 people dead or missing.

Not all residents in the temporary shelters in Cabalawan have a steady source of income.

Some of the residents have come to depend on aid from international donors, which do not always come.

But there are also survivors who have endeavored to find a living. Several residents have set up sari-sari stores on the small front porches of their houses.

Alaga has taken it upon herself to supplement her husband’s income as a technician. She sells drinking water to her neighbors, as well as cell-phone airtime while taking care of her 4-year-old and 9-month-old children.

While waiting for her permanent home, she is doing her best to make her temporary shelter a happy place.

A family picture, her husband’s certificates for finishing electronics courses and a small poster with a prayer adorn the walls.

She has also set up a small Christmas tree that she bought for P35.

But she continues to look forward to a permanent home.

“I hope we can move there soon,” she said. With a report from Jerry E. Esplanada