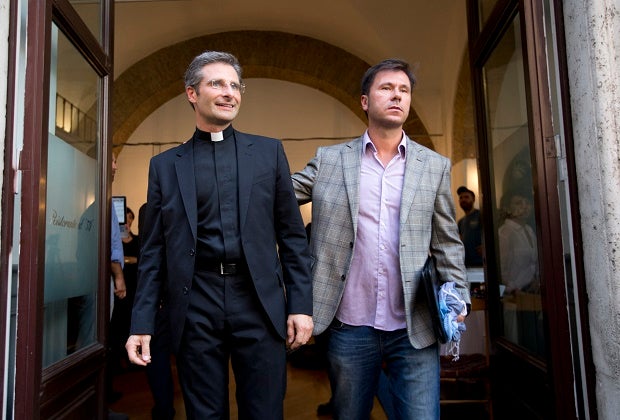 Monsignor Krzysztof Charamsa, left, and his boyfriend Eduard, surname not given, pose for a photo as they leave a restaurant after a press conference in downtown Rome, Saturday Oct. 3, 2015. Vatican on Saturday fired a monsignor who came out as gay on the eve of a big meeting of the world’s bishops to discuss church outreach to gays, divorcees and more traditional Catholic families. AP Photo

WARSAW, Poland—A Polish priest who lost his job at the Vatican earlier this month after revealing that he is gay and has a boyfriend was indefinitely suspended Wednesday by the church in Poland from performing the functions of a priest.

Rev. Krzysztof Charamsa, 43, came out as gay and criticized the Vatican for its approach to homosexuality on the eve of a major meeting of world bishops in Rome. The Vatican immediately fired him from his job with the Congregation for the Doctrine of Faith and his local bishop in Poland, which is predominantly Roman Catholic, called on him to return to proper priestly behavior.

On Wednesday, Charamsa’s home diocese of Pelplin, based in Gdansk, said he hadn’t shown any signs of improvement and has been suspended as a priest and can no longer wear priestly vestments. It said in a statement that the punishment can be reversed if Charamsa returns to the “true teaching of the church and Christ’s priesthood.”

“The penalty is intended to inspire in … Charamsa a real improvement of life and it can be reversed. That depends, however, on the future comportment of the above mentioned priest,” according to the statement posted on the diocese website.

It said that in the Catholic Church a suspension is intended to make the person “come to his senses.”