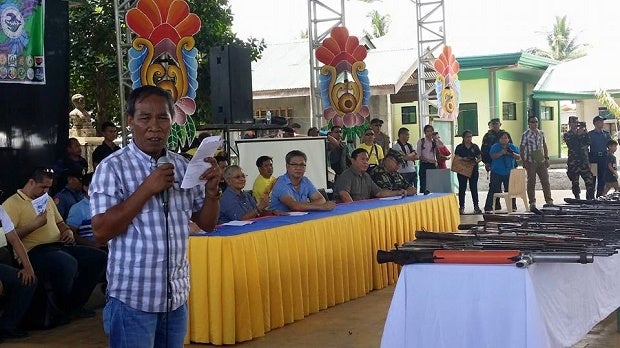 Loreto Mayor Dario Otaza speaks at the Serbisyo Caravan event held in his town on May 29, 2015, when 154 members of the New Peoples’ Army were presented after leaving the rebel group. Beside Otaza are the guns of the former rebels. NIKKO DIZON / INQUIRER FILE PHOTO

BUTUAN CITY—A day after the bullet-riddled bodies of Mayor Dario Otaza of Loreto town and his son, Daryl, were found in a remote village here, the Philippine National Police on Tuesday relieved the police chiefs of Agusan del Sur province and this city from their posts.

Senior Supt. Joseph Plaza, provincial police director, and Senior Supt. Francisco Dungo, city police chief, were removed pending the outcome of an investigation into purported security and intelligence lapses that led to the abduction and execution of Otaza and his son, said Supt. Martin Gamba, spokesperson for the Caraga police.

On Monday, armed men disguised as agents of the National Bureau of Investigation barged into the mayor’s house here shortly after he arrived past 6 p.m. and forcibly took him and his 27-year-old son. The next day, their bodies were recovered, hogtied and riddled with bullets.

Police, military and politicians in the Caraga region have condemned the death of Otaza, 53, a Manobo and a former communist rebel who became an outspoken critic of the New People’s Army (NPA) after he was elected in 2013.

Otaza formed a tribal militia force called Bagani, which later figured in a daring attack on an NPA camp in Loreto that left 10 rebels, including a top leader, dead in 2009.

Military sources said Otaza’s killers were led by leader of the NPA Front Committee 34 who is the son of a slain NPA leader, a certain Ka Tindogan.

Willie Otaza, brother and executive assistant of the mayor, said he was dead sure the killers were rebels who in the past publicly vowed to go after the chief executive. “You’ll have your day,” he said, referring to those who carried out the “brutal and inhuman” execution.

Gamba said Dungo would be investigated over purported deficiencies in monitoring rebel movements in the city and for the supposed delayed response in going after the assailants.

Plaza, on the other hand, will be asked to explain why he failed to provide enough security escorts for the mayor, who held office in Loreto but went home almost daily.

Col. Alexander Macario, commander of the Army’s 401st Infantry Battalion based in Prosperidad, also in Agusan del Sur, said he was racing against time to pacify Otaza’s followers and prevent reprisal attacks.

The breakout of a bloody war between loyalists of the slain mayor and “lumad” (indigenous peoples or IPs) perceived to be rebel supporters is not far-fetched, Macario said.

In Manila, former Armed Forces Chief of Staff and now Malacañang Undersecretary Emmanuel Bautista said he was pained by Otaza’s murder even as he himself had sent men off to war and dealt with the deaths of soldiers young and old.

Bautista, now the executive director for the Cabinet cluster of peace, justice, and security, said he suspected that the mayor was able to convince “many more” tribal men who became rebels to surrender and that this might have prompted the NPA leaders to kill him.

“I always asked him to help [government] push the Serbisyo Caravan and urge more NPAs, especially the IPs, to surrender,” Bautista told the Inquirer on Tuesday.

Serbisyo Caravan is the peace and development initiative of the Office of the Presidential Adviser on the Peace Process (OPAPP), aimed at reaching mostly the lumad in Mindanao and encouraging those who have joined the NPAs to return to the government fold.

It was launched in Loreto on May 29, with Otaza among the government officials who led the project that reached over 3,000 residents.

A study by the Army’s Eastern Mindanao Command (Eastmindcom) showed that 74 percent of the NPA recruits in Agusan del Sur were IPs, many of them farmers.

In the House of Representatives, a lawmaker from the Visayas warned authorities that the execution of Otaza and his son Daryl might trigger a “full-scale tribal war” in Agusan del Sur.

In a statement, Iloilo City Rep. Jerry Treñas asked military and police forces to step up peacekeeping operations to prevent the escalation of violence. With a report from DJ Yap in Manila