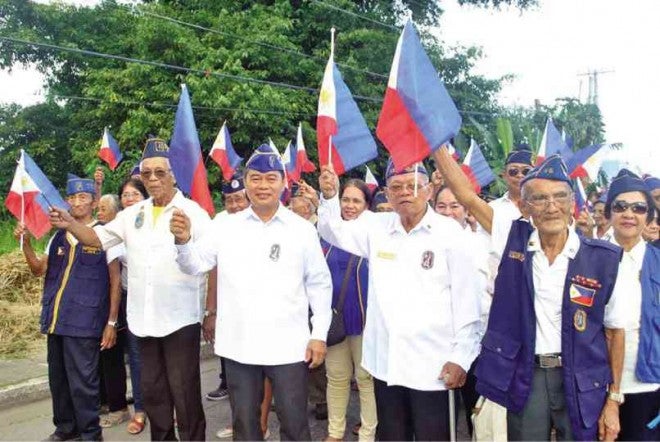 PALO, Leyte—Members of various militant groups staged a protest rally on Tuesday, claiming that the government did not help enough survivors of Supertyphoon “Yolanda” as representatives of different embassies who attended the 71st Leyte Gulf Landings paid homage to the resiliency of the Filipino people in the aftermath of the world’s strongest typhoon to make landfall.

About 100 people staged the protest rally more than 200 meters away from where a commemorative program on the arrival of American forces led by Gen. Douglas MacArthur, which resulted in the liberation of the Philippines from the Japanese Imperial Army 71 years ago.

Jun Berino, spokesperson of Katungod-Sinirangan Bisayas, said the national government did not extend enough assistance to survivors of Yolanda, which hit Leyte on Nov. 8, 2013.

The group claimed that close to two years now, after Yolanda pummeled the province, thousands of families still live in temporary shelters, not knowing when they would be eventually moved to their permanent shelters.

Representatives from the United States, Japan, United Kingdom and Australia, which sent no less that its ambassador to the country, Bill Tweddell, extolled the resiliency of the Filipino people during the onslaught of Yolanda aside from paying tribute to the “heroism and bravery” of the Filipino veterans during World War II.

Tweddell, the highest foreign official who attended the 71st commemorative program, said his government had joined a humanitarian mission to help the survivors of Yolanda.

Australia extended about P3 billion worth of assistance to the country for Yolanda.

The Japanese representative, Tetsoro Amano, deputy chief of mission, also said his country would continue to provide assistance to the country to ensure that areas hit by Yolanda could recover.

He said his country has extended $60 million worth of assistance.

The US was represented by Glenda Taylor, head of the Veterans Service Center, and US Marine attaché Lt. Col. Mark Broekhuizen.

The national government has so far provided P47.06 million in financial assistance to the relatives of those who perished during the monstrous typhoon, according to Edgar Posadas, regional director of the Office of Civil Defense.

The amount represents assistance to 3,946 people who died due to Yolanda across the region. The data covers January, 2014 to September this year.

The government also released another P46.58 million to those injured during the onslaught of Yolanda.

Posadas said the number of claimants, both for those killed and injured, could still increase considering that there were still pending applications for assistance.