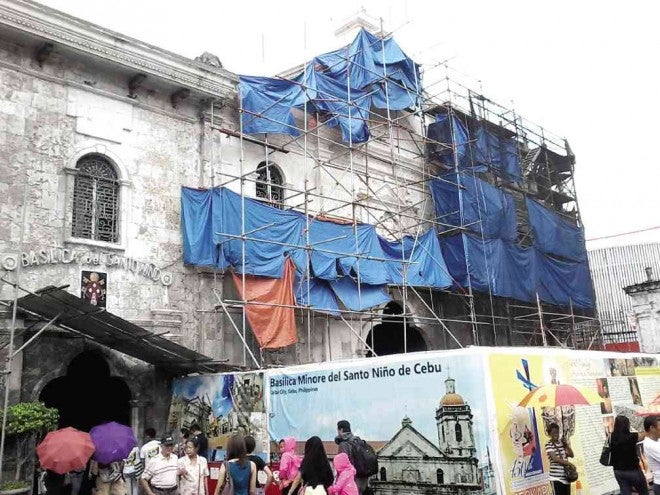 THE BASILICA Minore del Sto. Niño undergoes restoration work to repair its bell tower that was destroyed during the 2013 earthquake. ADOR MAYOL/INQUIRER VISAYAS

Slowly, life has edged back to normal in Cebu’s historic churches two years after a 7.2-magnitude earthquake rocked the province and neighboring Bohol.

Restoration works, however, still continue, beset by the big challenge to bring back the grandeur of these places of worship in time for the 51st International Eucharistic Congress (IEC) on Jan. 24 to 31, 2016, in Cebu City.

Ten churches were damaged when the earth shook in Cebu in the morning of Oct. 15, 2013. Only three—Cebu Metropolitan Cathedral, the ecclesiastical seat of the Cebu Arch-diocese, in the downtown area; the St. Catherine de Alexandria Parish in Carcar City; and the San Guillermo de Aquitania Parish in Dalaguete town—have completed restoration work.

Fr. Brian Brigoli, chair of the Cebu Archdiocesan Commission on Culture and Heritage, said work was being done in two phases. The first involves a detailed study and proper procedures to determine whether the site is still safe. The second is the actual restoration.

“Restoration works should not be hastily done. We need to study very well first before carrying out the necessary intervention procedures,” Brigoli said.

In the case of the Basilica Minore del Sto. Niño, Cebu’s oldest church, work is still ongoing to rebuild the bell tower that collapsed during the quake.

“We have been given an assurance that everything will be finished by December or early January next year (in time for the IEC),” said Fr. Jonas Mejares,  rector of the centuries-old basilica. “We’re really doing the best we can so that by the time the delegates visit the basilica, they will see its splendor.”

The bell tower project was awarded to 401 Development and Construction Corp., which won the bidding held in mid-2015. The firm had earlier restored the churches of Santa Barbara and Miag-ao in Iloilo province.

It was only in July when reconstruction work began in the basilica, supervised by the National Historical Commission of the Philippines (NHCP).

Metal scaffoldings and braces have been installed at the façade to protect churchgoers from falling debris and to support the remaining structures. Workers are currently bleaching that area to remove dirt and dark spots on the coral stones.

“We are taking steps to maintain the beauty of the basilica. We must take care of the entire structure and everything on it for the benefit of the people,” he said.

The Basilica Minore del Sto. Niño has been the home of the centuries-old image of the Child Jesus that was given as baptismal gift by Portuguese explorer Ferdinand

Magellan to Cebu’s Queen Juana in 1521. The original church was founded in 1565, but the current structure, which is made of coral stones, was finished not later than 1739.

While the façade design is being brought back to original, not all seven bells will be reinstalled as suggested by experts so as to lighten the load on the tower’s foundation.

“The biggest bell will no longer appear on the tower. It shall be removed because it poses risks during earthquakes due to its weight. Only the six smaller bells shall be reinstalled there,” Mejares said.

Msgr. Ruben Labajo, team moderator of the Cebu Metropolitan Cathedral, said he and the other religious officials had been relying on financial donations, second collections during Sunday Masses, and fund-raising events for the repair of major cracks on its façade and interior walls.

“We were told that the government could not provide us with financial help because we didn’t follow the procedures such as having a DES (detailed engineering study), Labajo said.

The DES serves as a reconstruction guide. It includes processes to determine soil stability and reusability of structural materials.

Labajo said the cathedral had already spent about P8 million for repair and needed the same amount to beautify it and its premises in preparation of the IEC. Some 15,000 national and foreign delegates are expected to attend the event.

“We appeal to people for help. Amid all these calamities, people never wavered in their faith. They are instead strengthened and inspired to unite for a cause. Yes, there are struggles but in the end, we know a reward awaits us,” he said.