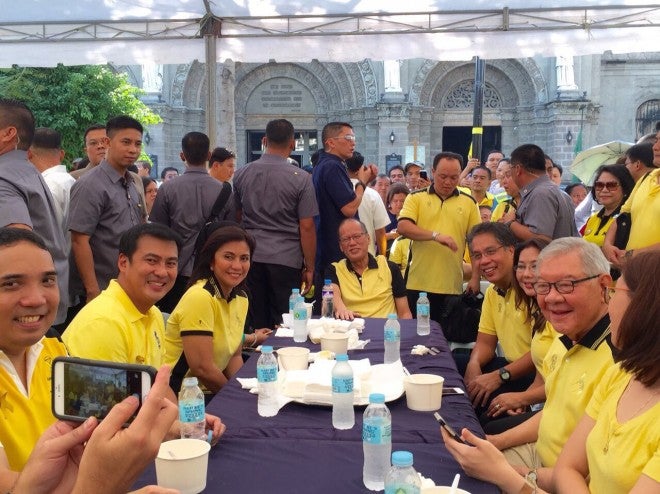 President Aquino spared some time from his busy schedule to join LP standard bearers Mar Roxas and Leni Robredo and their families for a mass and a simple breakfast before the two filed their candidacies on Thursday morning. For breakfast, they had lugaw (porridge) and bread. CONTRIBUTED PHOTO/YACAP PARTYLIST REP. CAROL LOPEZ.

The presence of the president with the “highest approval ratings since 1986” in the public appearances of Liberal Party standard-bearer Mar Roxas and running mate Leni Robredo will increase the tandem’s chances of winning in the 2016 elections, according to LP stalwarts.

LP spokesperson and Marikina Rep. Miro Quimbo said the attendance of President Benigno Aquino III in the campaign events of Roxas and Robredo would “reflect well” on the tandem and “definitely boost” their popularity.

Aquino, with presidential sisters Viel and Ballsy, spared some time from his busy schedule to hear Mass with Roxas and Robredo at Manila Cathedral before the pair filed their certificates of candidacy at the Commission on Elections office on Thursday morning.

Although the President did not go with the LP bets to Comelec, he joined the two for a simple breakfast in a tent set up at Plaza Roma outside the church.

“He wants to show that there is no doubt that he will campaign for a successor that he believes will continue his ‘daang matuwid’ program. It showed the degree of commitment he is willing to do. He is telling the candidates and their opponents the extent he is willing to do within the bounds of law,” Quimbo told reporters.

Aquino earlier vowed to campaign hard for Roxas, even telling other LP members to prioritize the party’s standard-bearer’s candidacy over theirs in order to continue daang matuwid in the next administration.

“The President puts his foot where his mouth is. He makes a bet unequivocally on someone he believes in. It is really an expression of his style of leadership which is showing clearly what he wants to happen, that he is putting his entire political capital on it,” Quimbo said.

“The impact of [his presence in Mar-Leni appearances] is (that) the President, at this stage of the game, has the highest rating among all presidents since 1986. Definitely, his influence will be positive,” Belmonte said in a separate interview.

Belmonte noted that Aquino’s vouching for Roxas could convince the people to trust the LP standard-bearer.

“Popularity and all of those things are very personal but when you put your complete trust in somebody, you vouch for somebody’s honesty, performance, qualifications. I think some people will believe you,” he said. Julliane Love de Jesus/RC