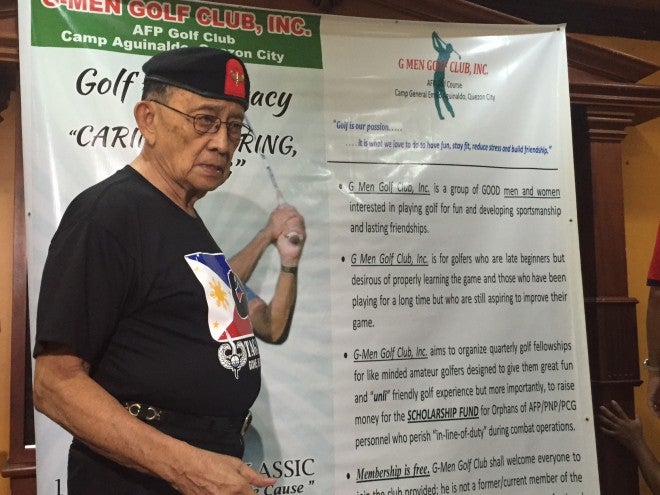 Former president Fidel Ramos launches a series of golf tournaments in Camp Aguinaldo on Thursday, to raise funds for the orphans of SAF 44 and other servicemen who died in battle. FRANCES MANGOSING

NINE months after the Mamasapano incident, the botched police raid which killed 44 policemen of Special Action Force, former president Fidel Ramos said on Thursday took a swipe at the government for “great injustice.”

Ramos founded the SAF when he was chief of the Philippine Constabulary in 1983.

“There is a great injustice not yet rendered to the families and the victims. There is no apparent final closure of that case because of the lack of follow-up or hot pursuit against the 90 persons identified in the charges,” he told reporters on Thursday at Camp Aguinaldo.

He said that local government officials must be tasked to help in going after the suspects.

A group of senior golfers led by Ramos launched the “G Men Golf Club” for amateur golfers in order to raise funds for the orphans of SAF 44 and other orphans of fallen servicemen.

They aim to raise about P5 million to take care of the needs of the orphans of the SAF 44 who are mostly in grade school. There are about less than 20 children who lost their fathers in the Mamasapano deadly mission.

The membership is free and the group aims to hold golf tournaments quarterly. The first tournament is scheduled at the Camp Aguinaldo golf course on Nov. 6.