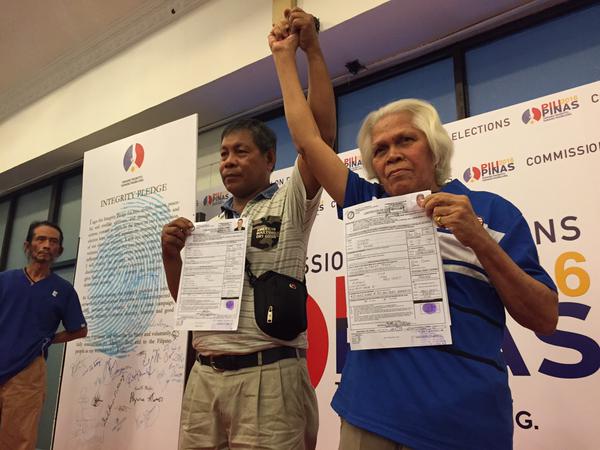 MANILA, Philippines—An “intergalactic space ambassador,” a man who believes he is Lucifer and a retired policeman who just wants his pension have announced bids for the Philippine presidency.

So-called “nuisance” candidates are a staple of the Southeast Asian nation’s chaotic democracy, and dozens have again emerged during this week’s registration period for next year’s presidential elections.

Among them is Allan Carreon, who turned up at election headquarters in Manila with his title of “intergalactic space ambassador” emblazoned on his shirt and advising voters he was receiving wise counsel from aliens.

“The aliens have given me the will to run for president,” Carreon told reporters.

One of his potential rivals is the heavily bearded Romeo John Ygonia who said he preferred to be called “Archangel Lucifer,” adding that he was running on the orders of his “master.”

Asked who his master was, he cryptically replied: “He is dwelling in my heart.”

Another claiming divine intervention was Marita Arilla, 70, who said she was a retired school teacher with ambitions of turning the Republic of the Philippines into a monarchy for God.

“I run for president as an independent candidate bringing the banner of an absolute monarchy that is an unlimited power of God,” Arilla told reporters.

“I am not suited to run for president. I don’t have money and I have no personality,” he told reporters as he registered.

He said he was running because he had not received his pension for five years, and government officials had ignored his requests for help.

“They will pay attention to me (now) because I am a presidential candidate,” he said.

More than 60 people had registered as presidential candidates by Thursday morning, according to election officials.

Many others are believed to be nuisance candidates, although election commission spokesman James Jimenez said it was too early to pass judgement.

He said, after investigations, the commission would disqualify candidates who planned to “make a mockery of the election system,” or who had no real intention of running.

“We don’t want to give a free pass to people who just want to get public attention,” he told ABS-CBN television.