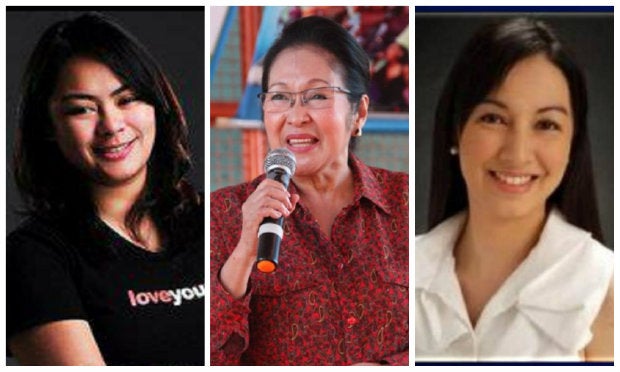 San Juan Mayor Guia Gomez and two scions of the Ejercito-Estrada clan have filed on Thursday morning their certificates of candidacies (COCs) for the city’s top three posts.

READ: Guia Gomez, Erap’s daughter up against Zamora in 2016 polls

Gomez is seeking reelection for her third and final term, while Councilor Janella Estrada is running for vice mayor. Former Councilor Jana Ejercito, who’s gunning for the city’s lone congressional seat, separately filed her COC at the National Capital Region office of the Commission on Elections.

Along with 12 candidates for city councilors, they make up “Team Puso (Team Heart ).”

Gomez, Janella and Jana’s run marks the first time the clan will be fielding three of its members to the city’s top posts. They will be up against their former allies—Vice Mayor Francis Zamora and Minority Floor Leader Ronaldo Zamora.

Francis is running against Gomez, while his father Ronaldo is facing off with Jana in his third and final run for Congress. The Zamoras’ ally, Councilor Rolando Bernardo, will be up against Janella for the vice mayoralty post. The Zamoras and their allies call themselves “Team San Juan.”

Janella is the daughter of detained Sen. Jinggoy Estrada, while Jana is the niece of former President Joseph Estrada, who started his political career in 1969 as San Juan mayor.

In an interview before they filed their COC, Janella boasted of the infrastructure projects initiated during the different Ejercito-Estrada administrations, such as the San Juan Medical Center and city hall. She taunted that the Zamora camp’s “achievement” in the city was only the repainting or building of basketball courts.