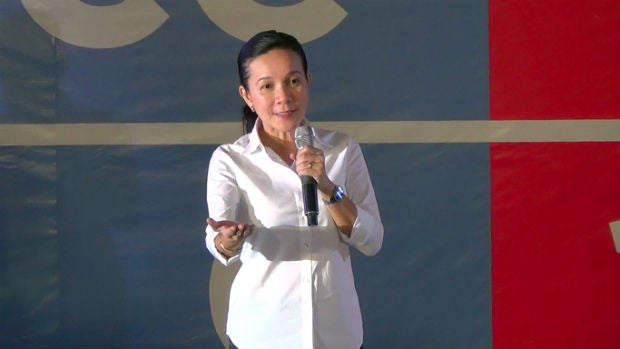 VETERANS and newcomers form a full and balanced 12-seat Senate slate from a coalition of four political parties that independent Sen. Grace Poe will announce next week.

A source in the coalition who is privy to the ongoing discussions said the candidates being considered for Poe’s senatorial lineup were:

The source, who talked to the Inquirer on condition of anonymity, said at least 10 of these individuals were a shoo-in in the Poe ticket: Sotto, Gatchalian, Colmenares, Romulo, Zubiri, Kapunan, Moreno, Manzano, Recto and Lacson.

Gordon has not yet made up his mind whether to run for senator or President. Rasul is still studying whether her health can stand up to the rigors of the election campaign.

Romualdez is still waiting for the partnerships in the 2016 presidential election to firm up because his  cousin, Sen. Ferdinand “Bongbong” Marcos Jr., could be the running mate of one of the major presidential candidates.

The source said that Poe was close to finalizing a four-party coalition to support her presidential bid: NPC, Makabayan, Nacionalista Party and National Unity Party.

The source said that as an independent candidate, Poe had more leeway in choosing her senatorial ticket and aligning with political parties.

Poe, who leads all major surveys on presidential preferences, and Escudero are expected to file their certificates of candidacy (COCs) at the Commission on Elections (Comelec) headquarters today.

There will be no one big announcement of the senatorial slate of the United Nationalist Alliance (UNA) of Vice President Jejomar Binay, according to spokesperson Mon Ilagan. This was because UNA senatorial candidates would be individually filing their COCs, Ilagan said Wednesday.

Actress Alma Moreno, who is a councilor of Parañaque City, and Princess Jaycel Kiram of Sulu filed their COCs Wednesday.

Ilagan said UNA was finalizing the remaining members of its senatorial slate, a mix of UNA stalwarts, guest candidates and sector representatives. “What’s important is that we would hopefully complete the slate before the deadline of the filing of COCs on Friday,” he said.

Asked about the possibility that Sarangani Rep. Manny Pacquiao would be included in the UNA senatorial slate, Ilagan said the party would  know for sure by Friday upon the boxing champ’s return  from the United States.

Pacquiao is reportedly still waiting for Davao City Mayor Rodrigo Duterte to make up his mind about running for President.

Sen. Gringo Honasan, vice presidential running mate of Binay, had said the party was looking for “credible people” who subscribe to the UNA platform. With a report from Christine O. Avendaño