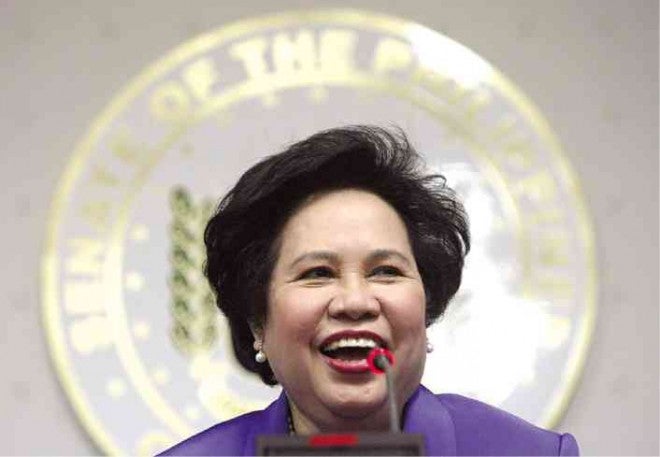 Almost one-third of Inquirer.net poll voters is against the presidential run of Sen. Miriam Defensor-Santiago, saying she should take care of her health first. INQUIRER PHOTO

Sen. Miriam Defensor-Santiago should resolve her health issues first before pushing for a third attempt to become the country’s next chief executive, according to the results of a poll answered by INQUIRER.net readers.

The poll posed the question: “Should Miriam Defensor-Santiago run for the presidency again?”

About 32.98 percent of the total voters, or 5,756 readers, said Santiago should take care of her health problems first and defer from running for president.

On July 2014, the senator announced that she was suffering from stage 4 lung cancer. Prior to that, she had been on medical leave due to chronic fatigue syndrome.

A close 32.08 percent of total voters or 5,598 readers, however, had a contrary view and urged the feisty senator to run for president.

Some 526 readers said the senator should run as an additional option while 191 readers were undecided.

On Tuesday, Santiago announced that she would throw her hat in the presidential ring in next year’s elections as she had already beaten cancer.

READ: Miriam Santiago will run in 2016, says ‘PH will be much better if I become president’

The 70-year-old lawmaker said that should she become the Philippines’ next president, “this country will be much better than it was before.”

She did not name her running mate but hinted that he had already filed his certificate of candidacy.

The INQUIRER.net poll is not a scientific survey. It is an interactivity tool that can, within its limits, reflect the interests of online readers. Aries Joseph Hegina/RC