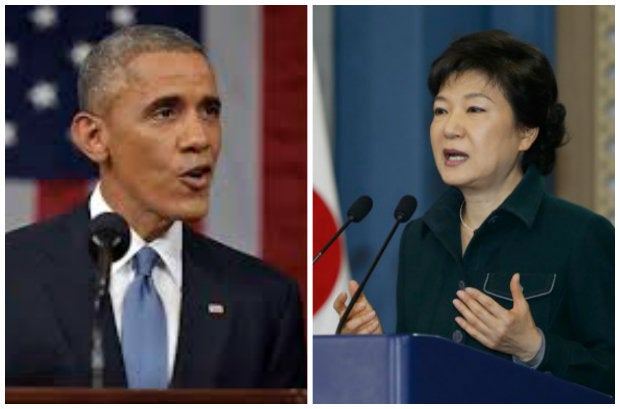 WASHINGTON—President Park Geun-hye kicked off her official four-day visit to Washington on Tuesday to seek fresh momentum in reinforcing the alliance with the U.S., and bringing the focus back on North Korea’s nuclear ambition.

Expectations are high for the South Korean leader as her trip to Washington comes at a critical juncture in dealing with North Korea amid looming provocations from the North, such as a long-range missile launch, and subtle tensions following Seoul’s closer relations with Beijing—Pyongyang’s biggest benefactor and traditional ally.

Park’s visit is also expected to serve as an opportunity to ensure that South Korea remains one of the strongest allies of the U.S., and to dispel concerns that Seoul has inclined to Beijing both politically and economically, according to observers.

But most importantly, Park is tasked with persuading her U.S. counterpart Barack Obama to engage more with North Korea to push the reclusive regime back to the negotiation table.

“Washington has been reluctant to restart a dialogue with Pyongyang,” said Handong University professor Park Won-gon, referring to North Korea’s repeated reversal of past agreements on its nuclear development.

“This is why President Park has to make utmost diplomatic efforts to convince President Obama that North Korea is crucial in his mission of denuclearization after Iran.”

Friday summit
Park and Obama will be holding a summit Friday in which the two are set to reaffirm the South Korea-U.S. alliance, as well as the peace and stability on the Korean Peninsula, Cheong Wa Dae said. It is Park’s second official visit to the U.S. and her fourth summit with Obama since she took office in February. The two leaders are expected to adopt a joint fact sheet on ways to bolster Korea-U.S. partnership and possibly a joint statement on North Korea.

The summit, previously planned in June, was delayed due to the Middle East respiratory syndrome outbreak that hit South Korea hard this summer. Having the summit this week, however, turned out to be a better choice for Park, as in June the two countries had not-so-crucial agendas on the table compared to now, said ChungAng University professor Kim Tae-hyeon.

“The summit will be taking place after Park visited China to attend the ilitary parade as the only leader of a U.S.-allied nation,” said Kim. “Not only the bilateral agendas, but also the two will be discussing ways to strengthen the strategic alliance for peace in Northeast Asia keeping China in mind … considering its possible role in resolving North Korea’s nuclear ambition,” he said.

The meeting with Obama has been widely considered a watershed moment for Park’s diplomatic drive following her talks with China’s Xi Jinping in September. Park is set to hold trilateral talks with China and Japan later this month or early next month, in a quest for more leverage to press Pyongyang as well as an improvement in strained ties with Tokyo.

Park starts her official schedule Wednesday by paying tribute to Korean War veterans in the morning and will also visit the NASA Goddard Space Flight Center to seek wider cooperation in space industry. She will attend a forum on high-tech industry later in the day.

On Thursday, Park is set to make her first visit to the Pentagon since her inauguration and to attend a luncheon hosted by Vice President Joe Biden at his residence. The president will also have a roundtable with economic leaders and a visit to the Center for Strategic and International Studies.