Bongbong Marcos believes in numerology, too

JUST like his father, the late dictator Ferdinand Marcos, the namesake son is a believer in the magic of numerology.

That was why, after declaring martial law on Sept. 23, 1972, the elder Marcos backdated his Proclamation No. 1081 to Sept. 21, because it is divisible by 7, regarded as an auspicious day.

Sen. Ferdinand “Bongbong” Marcos Jr. believes that the No. 7 will still bring luck in his bid to run for the vice presidency in 2016.

“I was told that I was the seventh person to file certificate of candidacy [for Vice President]. I guess the lucky 7 for us Marcoses is still here. I think it’s a good omen,” Marcos told reporters shortly after he filed his COC for Vice President at the Comelec main office in Intramuros, Manila.

Accompanied by his wife Liza and his mother Imelda, Marcos was mobbed by members of the media, supporters and employees of government offices in Intramuros.

“Thank you for taking interest. Even in filing my COC you are already here. I hope this is a good sign,” Marcos said.

Tension rose at the poll agency as Marcos and his wife were being led to the area where the media could ask him questions.

Members of the media, supporters and government employees all went into a frenzy, wanting to take photos or videos of Marcos.

Because of the chaos, Marcos was immediately whisked away from the press and did not grant an interview.

Romualdez had to delay for a few minutes his filing. He wanted to do it precisely at 9 a.m., possibly the appointed fortuitous hour for him. 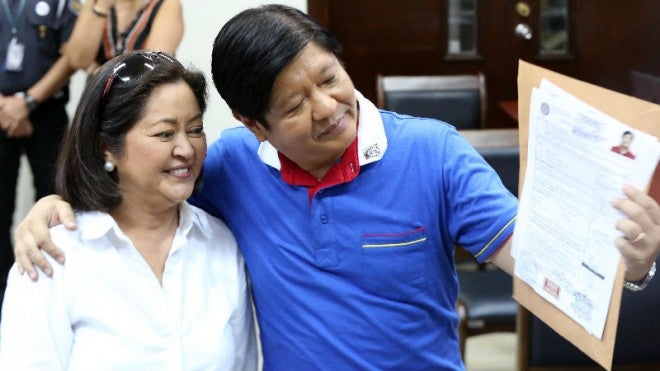 Apparently a believer of feng shui and the good fortune the Chinese practice purportedly brings, Romualdez asked the Comelec staff processing his documents to wait for a few minutes.

“We thought there would be too many people filing so we came a bit early,” he was overheard telling a clerk.

Romualdez said he would push for the empowerment of the youth and persons with disabilities (PWDs) as well as resolving issues on climate change, urban disaster and ethnicity.

The three-term congressman of Leyte province is also pushing for the exemption of PWDs from the value-added tax or VAT.

“I am here today as part of my commitment to honor the Romualdez legacy of dedicated public service. It’s about time that we give back the compassion shown by our people. I will make it my personal mission not only in Leyte but in the whole country,” Romualdez said. With a report from Jocelyn R. Uy