More  lumads driven out of homes in Bukidnon 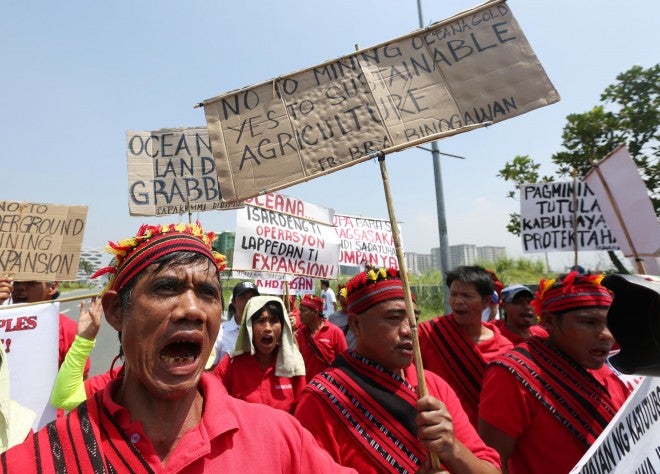 Lumads protest military operations in their communities, alleging mining firms and loggers want to take over their lands in Mindanao. MARIANNE BERMUDEZ

DAVAO CITY – More lumad from Kitaotao, Bukidnon, have sought refuge at the Haran Compound of the United Church of Christ of the Philippines (UCCP) here as more soldiers intensify their counter-insurgency patrol.

Jong Monzon, secretary-general of Pasaka-Southern Mindanao, said 165 Pulangihan Manobo from Barangay White Culaman in Kitaotao on Monday arrived at the UCCP Haran Compound, where 668 lumad from Bukidnon and Kapalong, Davao del Norte, have been  staying after they evacuated because of the militarization in their communities.

Ellen Manlibaas, chair of the Kahugpongan sa Mag-uuma sa (United Peasants of) Kitaotao, said the Pulangihan Manobos fled their homes following the arrest of 13 farmer leaders on August 25 by troops belonging to the 8th and the 23rd IB, who accused them of being members of the Communist New People’s Army (NPA).

Manlibaas, who was among those arrested, said the 165 lumad initially fled to the Arakan Parish on Aug. 25, and sought the help of Fr. Peter Geremia. After the cases against the 13 farmers were dismissed, the lumad evacuees in the Arakan parish decided to join their fellow Kitaotao evacuees in Haran.

Manlibaas said her group stopped asking for help from local government officials after the numerous dialogues they initiated in the past failed to yield results.

She added that soldiers burned four houses in Barangay White Culaman on October 3, and threatened to close the community school run by the Mindanao Interfaith Service Foundation Inc. (Misfi) in Sitio Dao.

Monzon said the arrival of the new batch of evacuees showed the widespread attacks against the lumad population.

He said the lumad have been attacked because of their opposition to the entry of big foreign corporations into their ancestral lands.

“It’s happening not only in Davao del Norte, but in Bukidnon as well, and also in Surigao,” he said. “Lumads are being driven out of their own lands.” SFM