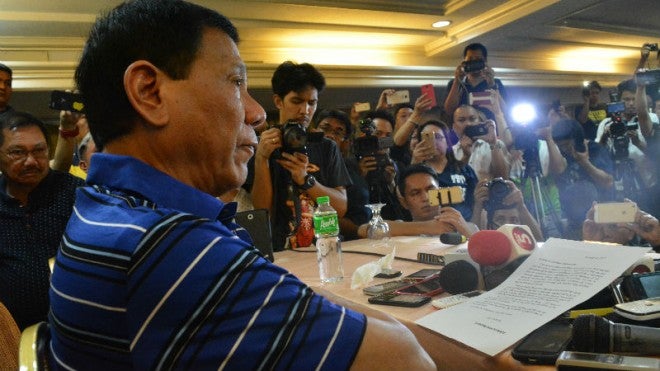 Only four days before the deadline for the filing of certificates of candidacy (COCs), Mayor Rodrigo Duterte declared for the nth time on Monday that he was not running for President, and he made it clear to the people of Davao City that his decision was final.

“This is a beautiful day to end a wild dream,” Duterte said, reading his letter to the people of Davao along with a letter addressed to him by daughter and former Mayor Sara Duterte, telling him not to run for President in the 2016 elections.

“Do not run for President,” part of his daughter’s letter said. “You don’t owe anything to anybody, and you’ve done more than enough for your country.”

Duterte, in his own letter, which he said he would ask Manila broadcasters to read the following day, apologized to friends and the people of Davao because he was not running for President.

“I address this to the people of Davao because I became a man and a mayor here, and here I will end my time,” he said, reiterating what he had been saying all along: that he was 70 years old, a certified old man and all he wanted to do in the morning was to stay in bed longer.

“When have you seen me coming to office very early?” he asked.

No ambition for presidency

“I beg for everyone’s understanding,” he said.

“After all, [I have no ambition to become President]. The country does not need me. I find no need for [the presidency],” he added.

Although everyone was prodding him to run for President because of his advocacy of federalism, he said, “I believe that my destiny is to end years and years of public life in the service of Davao City and every Dabawenyo.”

He also said his decision was “really a family thing.”

“We have a problem in the family, and in the order of things, you do what is closest to your heart,” he said.

Duterte also expressed unease, even irritation, at the attention he had been getting in Manila and at reports pairing him with Sen. Alan Peter Cayetano or Sen. Ferdinand Marcos Jr., both of the Nacionalista Party (NP) who are running for Vice President as independents.

“My face comes out cheap in public,” he said.

“I’ve never been used to this thing, even if you can say, we’ve reached the heights of glory, even my children, they’re fundamentally shy. Sara has made herself inaccessible and unavailable,” he said.

He said that like his daughter, he would also make himself inaccessible so that no one could sway him from his decision.

Duterte said that should he decide to run for reelection, he would file his certificate of candidacy at the Commission on Elections (Comelec) office on Oct. 15, the date that augured well for the feng shui, to give his new term new blessing and luck.

But he said he would not file any COC in Manila, where COCs for national races are filed.

“I tell you the many reasons I cannot be President, but to sum it up, can you solve all the problems confronting the Philippines?” he said.

Duterte said he longed for a quiet life, to pursue his main passion, hunting. He spoke about his secret and favorite place, where there was an underground waterfall and only he knew the direction of the current.

He said that if his daughter would agree to run for mayor, he would retire from politics, but if she refused, the option for him to run for reelection was “on the table.”

But was is it really final?

In a press briefing on Sept. 7, Duterte said his decision not to run for President was “final and categorical.”

He said as much at a gathering of journalists and supporters in a hotel here on Sept. 21.

But minutes after his announcement, Duterte flew to Manila.

The next day, he appeared at engagements in Malabon and Navotas.

He also visited a television station. He also met with Muslims traders in Greenhills.

Duterte also appealed to his supporters not to proceed with a plan to hold a rally at the Quirino Grandstand in Luneta on Sept. 26.

“Stop it. You’ll get nothing from it,” Duterte said.

The rally was held but the mayor did not show up there.

“If they find it a fulfilling vocation, I will not stop them,” he said.

On Sept 29, Cayetano announced his intention to run for Vice President in Davao City, a move seen to convince Duterte to make the senator his running mate if he was running for President.

The next day, Marcos went to Davao City and met with Duterte.

On Oct. 9, Duterte said he would not make an announcement if he was running for any position.

Speaking to reporters at a posh hotel here, Duterte, who admitted talking with the Partido Demokratiko Pilipino-Lakas ng Bayan (PDP-Laban) about the 2016 elections, said his supporters should just wait for his action in the coming days.

“If I show my face there at the (Commission on Elections) on the 15th, I will be filing my certificate (of candidacy) for the presidency,” he said.

But on Monday, he called a news conference to say he was not running.

On social media, some of his supporters expressed disappointment. Some, however, remained hopeful that he would change his mind before the end of the filing of COCs.

One supporter noted that the statement Duterte read during the press conference was unsigned.

Sen. Aquilino Pimentel III, the president of PDP-Laban, said on Monday night that he had yet to get confirmation of reports that Duterte had decided not to run.

“After the period for filing ends and Mayor Duterte really does not file, then the party will be free to choose [which presidential candidate to support],” Pimentel said.

He said, however, that he was “one of those millions of Filipinos who will continue to hope until [4:59 p.m.] of Oct. 16” that Duterte would change his mind. With a report from Christine O. Avendaño in Manila