THE EARLIEST birds came in various forms and sizes, with diverse interests, credentials and sometimes outrageous promises. But they shared a common aspiration: to become President of the Philippines.

One of the presidential aspirants described himself as a “crime buster” who had P26.12 trillion in reward for recovery of the Marcoses’ ill-gotten wealth, deposited in trust in the national treasury—enough to wipe out the Philippines’ debts and send the children of all Filipinos to school for free.

Another, a perennial candidate, promised to become the first President from Mindanao who would take back from China the entire West Philippine Sea.

And there was a 73-year-old aspirant who flaunted his age and wisdom and four doctor’s and two master’s degrees as some of his qualifications for the top government post.

Among the earliest to file their certificates of candidacy (COCs) in the Commission on Elections (Comelec) main office in Intramuros, Manila, were former congressman and ex-Technical Education and Skills Development Authority (Tesda) chief Augusto Syjuco Jr., lawyer Elly Pamatong and businessman Ephraim Defiño, who came dressed like a cowboy.

The three beat Vice President Jejomar Binay, who arrived at the Comelec central office before it opened its doors at 8 a.m. Monday, the start of the five-day registration of candidates for the May 2016 general elections. 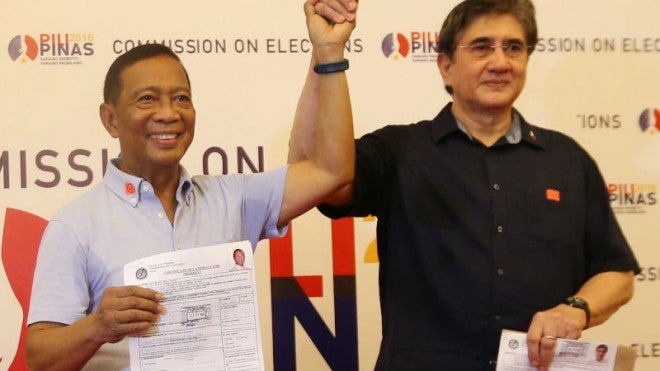 BIN-GO AT COMELEC Vice President Jejomar Binay and Sen. Gregorio “Gringo” Honasan II of the United Nationalist Alliance after filing their certificates of candidacy as President and Vice President, respectively, at the Commission on Elections in Intramuros, Manila, on Monday NIÑO JESUS ORBETA

Binay, accompanied by an entourage bigger than the Comelec three-companion rule, sealed his partnership with Sen. Gregorio “Gringo” Honasan, who was joined by his wife and chief of staff in filing his COC for Vice President.

As of 5 p.m. Monday, 22 people had registered their bids for the presidency, three for the vice presidency and 16 for the senatorial race.

In an interview with reporters, Syjuco said he was running for President as representative of Filipinos who were “angry and disgusted” with corruption in the government.

“I have never in my 73 years seen a government as corrupt and as incompetent as this particular government,” said Syjuco, who is facing graft charges in the Sandiganbayan in connection with the alleged overpricing of training materials worth P61 million during his term at Tesda.

Syjuco also said he was running for President so he could work with all the other presidential candidates to stop Liberal Party (LP) standard-bearer Mar Roxas from “grabbing and stealing the presidency.”

He said the elections were being manipulated to make it appear that Roxas was doing well in his bid for presidency.

“This is already a psy-war prep to show people that if Roxas can go up to 8 percent to second place, he can go up another 8 percent to first place and win,” Syjuco said.

He said he was the better candidate because nobody had his qualifications.

“I have four Ph.Ds, I have two master’s degrees, I am an economist, among other things. I am also a political analyst. I am the oldest living highest-ranking officer of the 1971 constitutional convention,” he said.

He also claimed that he created the Office of the Ombudsman, originated the accountability of public officers, and authored the laws on dual citizenship and overseas voting.

“I have made a lot of mistakes in my life to have learned. So I believe I have the maturity, the background and the wisdom,” he said.

“And one more thing, I don’t have a political party. I don’t have excess baggage to carry. There are no people I have to reward when I become President except the people themselves,” he said.

Pamatong, one of the regulars in presidential elections, vowed to reclaim the disputed West Philippine Sea and end China’s incursions on Philippine territory there.

“I will be the first Mindanaoan President,” Pamatong told reporters.

Danilo Lihay-Lihay, who described himself as a “crime buster” and an “informer” of the Supreme Court on the ill-gotten wealth cases against former President Ferdinand Marcos and his cronies, promised to pay all the country’s debts and make Philippines crime-free.

Lihay-Lihay also vowed to donate two-thirds of his monetary reward amounting to P17 trillion to the people and to eliminate the value-added and individual income taxes.