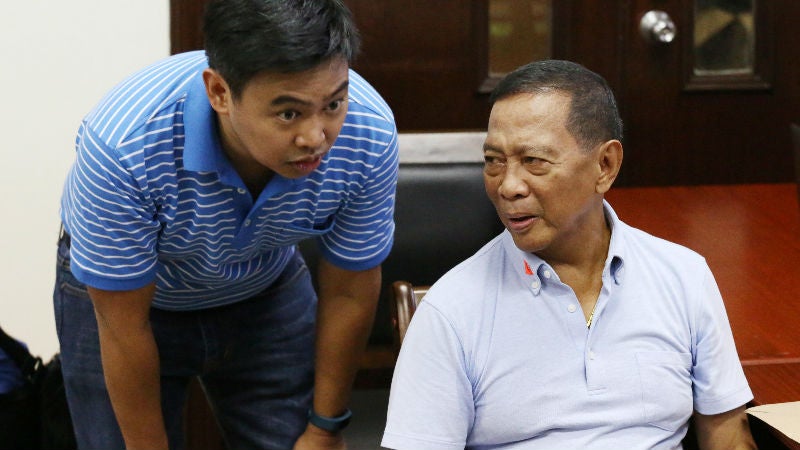 LIKE a phantom, the alleged irregularities in the construction of the P2.28-billion Makati City Hall Building II haunt Vice President Jejomar Binay and his family.

The Office of the Ombudsman approved the indictment for graft and other criminal charges of Binay, his son Makati Mayor Junjun Binay and 22 others Monday, just moments after he filed his certificate of candidacy for the presidency in the May 2016 general elections.

The recommendation against Binay came just three days after Ombudsman Conchita Carpio Morales perpetually barred the younger Binay from holding any public post also due to alleged irregularities in the construction of the 11-story parking building from 2007 to 2013.

However, Ombudsman spokesperson Janina Hidalgo admitted that prosecutors would have to wait for Binay’s term as Vice President to end before it could bring the criminal charges in the Sandiganbayan against him since he was an impeachable officer.

“Yes, he is immune (from suit), which is why our investigation and the indictment will have to wait until the end of his term,” Hidalgo said in a hastily called news briefing.

“If he wins the (elections), then we have to wait for another six years before we can file the cases against him,” she said.

Hidalgo said Binay and his lawyers were wrong in insisting that the Ombudsman had no jurisdiction over the Vice President, arguing that the Constitution and Republic Act No. 6770, the Ombudsman Act, gave the antigraft body the authority to investigate all public officials.

Hidalgo also dismissed insinuations that the filing of charges was meant to derail Binay’s presidential run, stressing that the investigation on the Makati parking building started in September 2014.

“That means the investigation took more than one year. It took us some time because this is a matter of national concern that the people have to be aware of considering that the elections are coming up,” Hidalgo said.

“Of course, the people have to know… as part of the mandate of the Office of the Ombudsman to inform the country of what is (happening),” she continued.

In a statement, the Ombudsman recommended the filing of four counts of graft, six counts of falsification of public documents and one count of malversation against Binay and others over the controversial construction project dubbed the “most expensive parking building in the entire country.”

Although Binay may be removed from office only through impeachment, Morales said it “does not insulate him from investigation.”

“Binay is being investigated for criminal acts committed while he was a city mayor and not as Vice President,” she said. “At all events, impeachable officers, like Binay, are within the investigatory power or jurisdiction of (the Ombudsman).”

Morales said evidence also supported allegations that “there was collusion” among the Makati City officials and one of the private contractors, Hilmarc’s Construction Corp., to “manipulate the outcome of the five ‘public bidding’ for the purpose of ensuring that Hilmarc’s would be awarded the contracts.’

“The existence of conspiracy among respondents is evident from the chain of events and as shown by the evidence on record,” Morales said.

She said an official of one of the purported bidders, JBros, denied that it took part in the public bidding which was allegedly rigged to favor Hilmarc’s.

“The construction projects were awarded to Hilmarc’s despite the lack of the required publication of the invitations to bid, with Hilmarc’s as the lone bidder in four phases of the project,” Morales said.

“(The) construction project began even in the absence of approved design standards, contract plans, agency cost estimates, detailed engineering and programs of work,” she said.

In addition, the Ombudsman said no preprocurement conference was held and the bid documents were made available only for one day.

The Ombudsman said there were “flagrant anomalies… found to have been committed by Binay et al. in the design and construction of the building consisting of six phases.”

It noted violations of RA 9184, or the Government Procurement Reform Act, such as the absence of publication of invitations to bid and “undue haste” in the awarding of the multimillion-peso project.

The antigraft body said it took only 11 days for the BAC to conclude the bidding process. It said a certification from the National Library “showed that no advertisement for the invitations to bid was made as attested to by the publisher.”

“The purported negotiation and evaluation of bid proposals… on Nov. 22, 2007, was conducted with extraordinary speed as for one hour only, the BAC completed the entire negotiation proceedings,” it said.

The Ombudsman said seven companies purportedly joined the public bidding. But the report of the Commission on Audit’s Fraud Audit Office said that “the negotiated procurement adopted by the BAC was improper.”