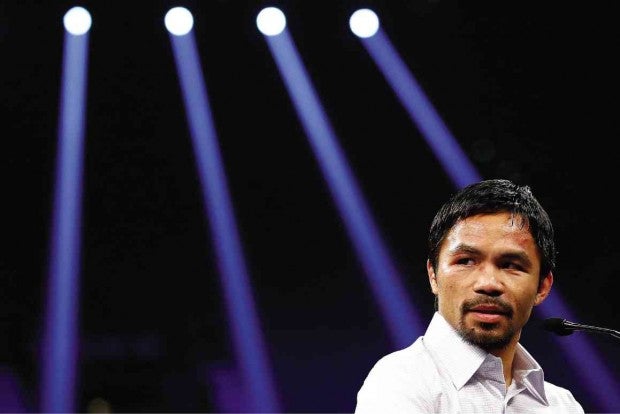 MANILA, Philippines — Sarangani representative and people’s champ Manny Pacquiao may deny being a superhero of sorts but his way of keeping his choice for a political party comes close to guarding an alter ego.

Pacquiao, who left Sunday night for New York to receive the distinction of being the Asia Game Changer for 2015, appeared overwhelmed by the abundant superlatives credited to him by the Asia Society, which bestowed him the honor “for using his sport, and his star power, as forces for good.”

“It (the award) means I am sort of a superhero. We all know that in reality I am not. I am but a man blessed by God who has answered His call to make a difference in people’s lives,” he said.

Asia Society president Josette Sheeran had said in a statement that the choices for the game changers in Asia: a group of scientists, a comedian, a dancer, a fighter pilot, and a boxer, have one thing in common, “they all fight for a better today and inspire the world to do things differently.”

Sheeran said that Pacquiao rose to the top of the list of honorees to be the Asia Game Changer of the Year. “Manny Pacquiao achieved his remarkable success after a childhood of extreme hunger and poverty. Today, Manny is a major humanitarian force, directing his philanthropy toward numerous causes, including education and the fight against human trafficking. He is a remarkable inspiration and demonstrates the power of giving back to transform people’s lives.”

Apart from the boxing champ and Sarangani representative, also to be honored on October 13 at the United Nations are: 2014 Nobel Prize in Physics awardees Isamu Akasaki, Hiroshi Amano, and Shuji Nakamura, the developers of the light-emitting diode or LED bulb; Chanda Kochhar of the Indian banking industry; Lei Jun, known as China’s Steve Jobs; Queensland Ballet artistic director Li Cunxin, who was one of China’s top ballet dancers; Indian comedian and activist Aasif Mandvi; Mariam al-Mansouri, one of the first women to join the United Arab Emirates Air Force known as “Lady Liberty” and “ISIS’s nightmare” in the social media; and Indian interior designer Kiran Bir Sethi.

At a press conference late Sunday before his departure on a Philippine Airlines flight to New York via Vancouver, Pacquiao said, “I am deeply honored to be recognized as the Asia Game Changer of the Year 2015 by the Asia Society. This is a great honor. I am so surprised at this award.”

For Pacquiao, the award means that boxing is not only knocking out opponents, it also means inspiring future athletes and encouraging every Filipino to work hard and “keep the good fight every single day so that they can support their families.”

The distinction also meant for him his accomplishment as a Sarangani representative in meeting the needs of his constituents and in addressing human trafficking as a lawmaker.

“This is among the most important awards I have ever received in my life for my accomplishment as a champion and as a God-fearing man,” he said.

Pacquiao, who expressed his firm intention of running for Senator, said that he would let go of boxing should he win in next year’s elections.

“If I become a senator, I have to devote myself 100 percent as a public servant,” he said, adding that he has been in boxing for more than 20 years and might hang up his gloves after one more fight.

Asked which political party he would join as a senatorial candidate, Pacquiao said that he has not made a choice yet although political parties have been expressing interest in including him in their respective senatorial slates.

He also dodged questions on whose candidacy for the presidency he would support.

Asked if he was inclined to simply run for senator as an independent candidate, “You’ll know by Friday,” he grinned.

Asia Society, founded in 1956 by John Rockefeller III, is an educational organization dedicated to promoting mutual understanding and strengthening ties among peoples, leaders, and institutions in Asia and the US on a global context through the arts, business, culture, education and policy.

Its honorees, Asians who make a transformative and positive difference for the future of the region and the world, are chosen annually through a global survey of over 1,000 international thought leaders. SFM