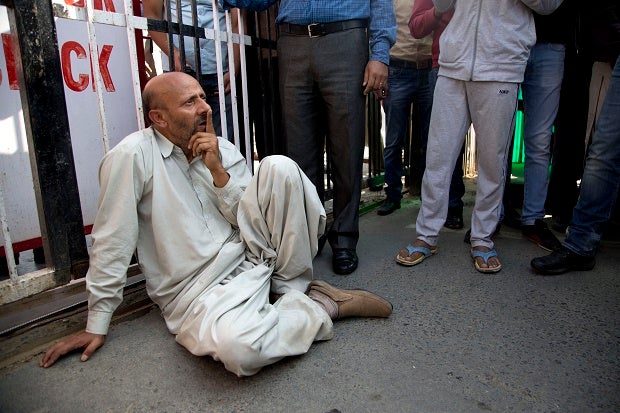 Engineer Rashid Ahmed, an independent member of the Jammu and Kashmir state assembly, sits as he blocks the traffic on the road with his supporters during a protest in Srinagar, Indian-controlled Kashmir, Friday, Oct. 9, 2015. Police in Indian portion of Kashmir detained dozens of supporters of Ahmed during a protest against India’s ruling Bharatiya Janata Party or BJP after their lawmakers kicked and punched Ahmed for hosting a party where he served beef on Thursday. Hindus consider cows to be sacred, and slaughtering the animals is banned in most Indian states. AP Photo

SRINAGAR—Lawmakers from India’s ruling Hindu nationalist party in India-held Kashmir have kicked and punched an independent member of the state assembly for hosting a party where he served beef. Slaughtering of cows is banned in most Indian states.

Other opposition lawmakers rescued Ahmed and later staged a walkout.

The ruling party lawmakers were angry over a party hosted by Ahmed the previous night at which he served beef.

Differences have deepened within Kashmir’s ruling coalition, with the Hindu nationalist party demanding a ban on slaughtering cows and selling beef in the Muslim-majority state.

Moves to protect cows have intensified since Modi’s Hindu nationalist BJP came to power after general elections last May.

Many Hindus regard the cow as the living symbol of their religion and consider it sacred. Hindu welfare organisations run gaushalas, or cow shelters, in many cities where abandoned cows found wandering the streets are given food and shelter.

Feeding a cow is seen by many Hindus as a way to appease the gods and get one’s wishes fulfilled.