Glass walkway over China canyon cracks with tourists on it 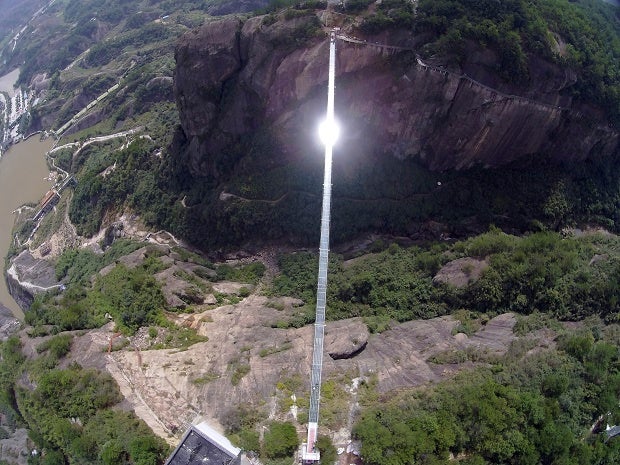 Sunlight reflects off a glass-bottomed suspension bridge as seen from the air in a scenic zone in Pingjiang county in southern China’s Hunan province Thursday, Sept. 24, 2015. The bridge, about 300 meters (984 feet) long and 180 meters (590 feet) above the valley floor, opened to visitors on Thursday for the first time since its conversion from a regular suspension bridge was completed. AP

BEIJING — A glass walkway that hugs a cliff above a scenic canyon in central China was closed after cracks developed while dozens of tourists were walking on the newly built structure.

Only one of the three layers of glass that make up the walkway was damaged so there was no safety threat, the management bureau of the Yuntaishan scenic area in Henan province said on its microblog Thursday.

The walkway was supporting dozens of tourists when the cracks appeared with a loud bang Monday. A single pane of the 68-meter (223-foot) section shattered into coin-sized segments, according to footage on state broadcaster CCTV.

Postings to China’s Weibo messaging service described the fears of tourists who heard the panel crack, but there were no indications of mass panic or injuries.

The structure hugs a cliff side roughly 120 meters (394 feet) above a canyon in the remote mountain area renowned for its scenery. It opened on Sept. 20, and the problem occurred at the height of China’s weeklong Oct. 1 National Day holiday.

The post on the management bureau’s microblog said the cracks formed due to external force but wasn’t specific. It added that the walkway can support weights of more than 800 kilograms per square meter (175 pounds per square foot).

A glass walkway above London’s Tower Bridge had a similar problem in November when a falling bottle shattered the top layer of one pane, which was designed to be easily replaceable if damaged.

Such walkways have grown popular in China as scenic areas compete to attract increasingly affluent Chinese tourists. The world’s highest and longest glass skywalk is located in Hunan province’s Zhangjiajie, known as the model for the planet Pandora in the film “Avatar.” The structure stretches 430 meters (1,410 feet) at a height of 300 meters (984) above the canyon floor.