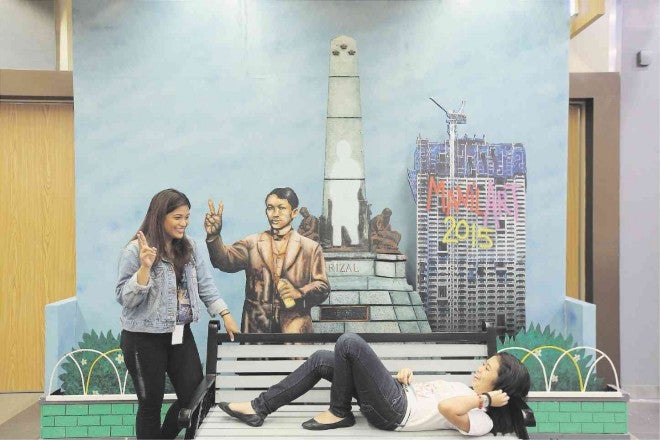 AN ART installation unveiled on Thursday to inaugurate the 2014 edition of ManilArt, the biggest art fair in the Philippines, commented on the very heated controversy over the 49-story Torre de Manila, alleged by critics to be a photobomber for marring the sightline of the Rizal Monument in Luneta Park.

The installation by sculptor and stage designer Bonifacio Juan consists of a 10-foot-wall mimicking the Manila vista dominated by Torre de Manila and dwarfing the Rizal Monument, which mysteriously is emptied of its illustrious resident.

Where has Jose Rizal gone?

Rizal is photobombing, insinuating himself in the shots of fairgoers, who presumably would like to have their photos taken before the art installation.

Fairgoers and other art lovers, in fact, are invited by ManilArt organizers to have their photos taken with the national hero as intruder and spoiler, much like the Torre de Manila, which has invariably been called an “eyesore” and a “photobomber” for destroying the panorama of the famous monument.

The interactive art installation has become the biggest attraction of the seventh edition of ManilArt.

Some 30 major Philippine and foreign art galleries are taking part in the art fair, which will run until Oct. 11 at the SMX Convention Center of SM Aura Premier in Taguig City.

Another art installation by Juan in ManilArt is a canopy of origami butterflies that seems to mimic a park setting, leading some viewers to surmise it’s the artist’s recreation of Rizal Park as a complement to the Rizal Monument installation.

Moreover, Robillos explained that Juan’s work encouraged fairgoers and other observers to take part vicariously not only in the work, but also in the controversy.

The controversy has fired up patriotic rage among Filipinos, many of whom consider the Rizal Monument a national shrine.

It has also divided the nation between those who look at Torre de Manila, a high-rise development of D.M. Consunji Inc., as a symbol of progress, and those who look at it as a monument to excess and greed at the cost of heritage and history.

The controversy has reached the Supreme Court, which is set to rule on the petition of the Knights of Rizal, a group dedicated to promoting the ideals of Rizal, to have the structure demolished.

The controversy has also divided key cultural agencies, pitting the NCCA and the National Museum against the National Historical Commission of the Philippines (NHCP), which has cleared the construction of Torre de Manila.

Ironically, the NHCP is an ex-officio member of the NCCA board, which is the coordinating council for cultural concerns under the Office of the President.

The National Museum, whose declaration of the Rizal Monument in 2013 as a “National Cultural Treasure” was disregarded by the NHCP when it allowed the construction of Torre de Manila, is also on the NCCA board.

Solicitor General Florin Hilbay, after initially defending the NHCP decision to grant DMCI the permit and thus, upholding Torre de Manila, later reversed his position, saying that as chief government lawyer, his “ultimate client” was not the NHCP but “the Republic,” and implied Torre de Manila was “contrary  to the interests of government.”

As a result, NHCP Chair Serena Diokno had to ask her brother, lawyer Jose Maria Diokno, to defend the NHCP position in the Supreme Court.

ManilArt is supported by a grant from the NCCA, which administers the National Endowment Fund for Culture and Arts, a grants program for arts and culture activities by both private and public sectors.

In his remarks opening ManilArt 2015, Fr. Harold Rentoria, O.S.A., who heads the Subcommission on Cultural Heritage of the NCCA, where he sits as a board member, pointed to the theme of the art fair—“Raising the Filipino colors on the world stage.”

The Augustinian friar emphasized the need to have a strong historical memory as a necessary ingredient for national identity.

“Memory is a strong force in our life,” Father Rentoria said. “For an individual, it molds him or her into the person he or she will be. For a people, memory binds us and reminds us that we are a community.”