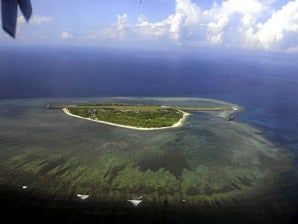 MANILA, Philippines—The Armed Forces on Thursday said it was validating reports that Chinese jet fighters had entered the country’s airspace around the disputed Spratly chain near Palawan but conceded it had no capability to detect and intercept the alleged intrusions.

AFP Chief Lt. Gen. Eduardo Oban said the military was checking the intelligence reports, but admitted that the AFP does not have the capability to detect or monitor such intrusions, and even if it does, it has no power to intercept them anyway.

“In terms of capability, No. 1, we don’t actually have the detection and monitoring capability, we don’t have radars to check if indeed they intruded into our airspace,” he said.

“No. 2, if indeed we have that capability, we need interdiction. We also have no capability to interdict or to intercept, which is why the first option is to lodge a diplomatic protest,” said Oban, who spoke at a Communication and News Exchange Forum sponsored by the Philippine Information Agency.

The AFP chief said he hoped that in time, “we can go in this direction, towards territorial defense.”

“We need to come up with an effective detection and monitoring system most particularly in the Palawan area where we have vast maritime resources to protect,” Oban said.

A military official, who spoke on condition of anonymity for lack of authority to speak on the matter, said the unidentified aircraft was observed at an altitude of about 5,000 feet.

The aircraft was spotted by the Filipino pilots of two OV-10 light attack and observation planes which were on a routine patrol mission near the Reed Bank, part of the Kalayaan group in the Spratly chain claimed by the Philippines.

“There was no provocation. They just flew over,” the officer said.

He added that at that distance, there was no easy way to ascertain if the aircraft was indeed Chinese.

Ethan Sun, the Chinese Embassy spokesperson, said he could not comment until he had verified the source of the report.

The latest Chinese incursion into the Philippine-claimed area of the Spratlys occurred just two days before the visit here of China’s defense minister, Gen. Liang Guanglie.

A Chinese Embassy statement said Liang will be making an “official goodwill visit” from May 21 to 25 at the invitation of Defense Secretary Voltaire Gazmin. He will call on President Aquino and hold talks with Gazmin, the statement said.

Oban could not say if the Spratly issue would be raised during closed-door meetings between Liang and defense officials.

The Spratlys archipelago, a reputedly oil-rich chain of tiny islands and reefs, is claimed wholly or partly by the Philippines, China, Malaysia, Brunei, Vietnam and Taiwan.

China has insisted it has sovereignty over the entire archipelago—which the Chinese call the Nansha islands but which everyone else refer to as the Spratlys—and is moved to “enforce” its claim from time to time by flexing its military muscle in the areas claimed by its rivals.

In March, two Chinese vessels reportedly harassed a Philippine exploration ship at the Reed Bank, prompting the AFP to send planes and Coast Guard ships to the area.

Last month, the Philippines said it had lodged a formal protest with the United Nations over China’s claim to the entire Spratly group and adjacent South China Sea waters, particularly the “nine-dotted line,” a map attached to a 2009 Chinese letter that delineated China’s claim.

Oban said the AFP was perfectly aware of China’s military buildup, which he described as a factor in China’s growing economic power.

But he stressed that he would not consider China’s recent actions in the Spratlys as “bullying.”

“At the AFP, we just do the mandate that’s given to us. We patrol our territorial waters to make sure that we protect our maritime resources and that no one enters our territory and violates our maritime laws,” he said.

In 2002, countries with overlapping claims to the Spratly islands signed the DOC which was to serve as a nonbinding guide on how to tackle the disputes.

According to the Chinese Embassy, Manila is the third leg of Liang’s Southeast Asian trip that includes Singapore and Indonesia.

The visit is expected to further advance Chinese-Philippine relations, “specifically military exchanges and pragmatic cooperation, thus enriching and enhancing the strategic and cooperative relationship between our two countries,” the embassy said.

Liang, a member of the Communist Party of China’s (CPC) Central Committee and fourth in rank in the CPC’s Central Military Commission, oversees the day-to-day operations of the People’s Liberation Army, according to the defense department.