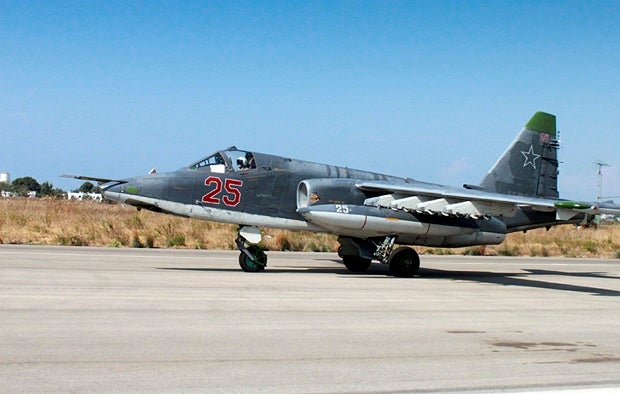 In this photo taken from Russian Defense Ministry official website on Tuesday, Oct. 6, 2015, a Russian SU-25 ground attack aircraft takes off from an airbase Hmeimim in Syria. A spokeswoman for the Russian foreign ministry has rejected claims that Russia in its airstrikes in Syria is targeting civilians or opposition forces. AP Photo

WASHINGTON, United States—Coalition aircraft have been re-routed on at least one occasion to avoid a close encounter with Russian warplanes over Syria, a Pentagon spokesman said Wednesday.

“We have an instance, at least, where there’s been action taken to make sure we didn’t have an unsafe separation” distance, Navy Captain Jeff Davis said.

The incident involved two F-16 fighter jets that were forced to abort a bombing sortie over Syria in order to remain within safe distance of the Russian planes, according to a US defense official

“They had to abort striking the target,” said the official.

READ: Only 5 percent of Russian strikes on Syria target ISIS—Britain

Davis said coalition air operations over Iraq and Syria continue and the effort to avoid Russian warplanes was not interfering with their broader mission.

But he said, “We have taken measures to re-route aircraft as necessary when there is an air issue where we might be getting close.”

Earlier, US Defense Secretary Ashton Carter denied that the United States had proposed to Moscow coordinating their air strikes.

“What we will do is continue basic, technical discussions on the professional safety procedures for our pilots flying above Syria,” Carter told reporters in Rome.

“That’s it. We will keep the channel open because it’s a matter of safety for our pilots.”

US and Russian officials held discussions last week—at Russia’s request—on establishing measures to avoid accidents so warplanes flying over Syria would not be in the same place at the same time.

For want of such a mechanism, the US defense official said the coalition has put in place “its own set of air safety rules.”

The F-16 pilots, who had taken off from Incirlik air base in Turkey, took the decision to abort based on those rules.

But despite Russian violations of Turkish air space at the weekend, Moscow has not participated in further talks—frustrating US military officials who had made repeated overtures.