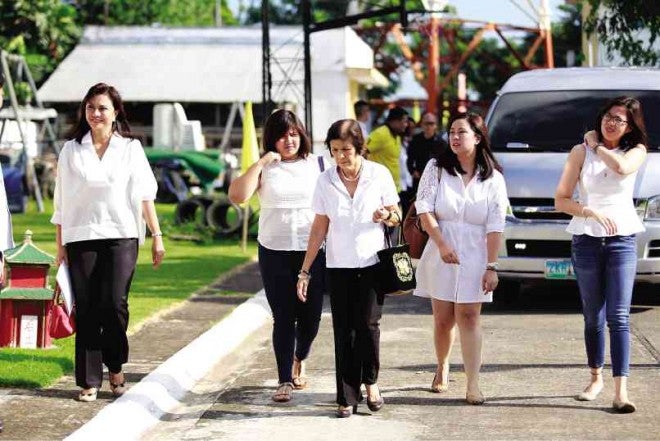 NAGA CITY—The fear of seeing their mother, Camarines Sur Rep. Leni Robredo, plunge into the political circus and their privacy invaded had kept her three daughters from agreeing to a plan for her to seek higher post until Sunday.

“My sisters (Tricia and Jillian) have always been very uncomfortable with the idea of our mother running for national post, and it was something we were adamantly against,” confessed Aika Robredo, the eldest of the daughters of Robredo and the late Interior Secretary Jesse Robredo.

“Family is the most important thing in the world for us, so our reluctance was rooted in our need to protect our privacy and to steer clear from the political circus,” she said.

In an earlier interview in August, when the Kaya Natin Movement was endorsing Robredo for vice president as running mate of Liberal Party standard-bearer Mar Roxas, Aika revealed that she and her sisters avoided discussing about her mother seeking a higher post to save their day.

“We always ended up crying,” she confided to the Inquirer.

On Wednesday, Robredo confirmed that the weeks before her children conceded to her decision to accept Roxas’ offer were “the most difficult and intense.”

“But upon her (mother’s) reflection, she told us she felt she was being called to say yes to this. Buo na ang loob niya (her mind was already made up), but she wouldn’t do this without our blessing,” Aika said.

She said the family went through a long process of discernment and could not decide until reflecting on what their father would have wanted. “Amid our misgivings and apprehensions even until the end, the question we ultimately had to answer was: What would our father want us to do?” she said.

Aika said that “deep in our hearts, we know that he would’ve [wanted] us to support our mother because we have responsibilities bigger than ourselves.”

“Among the Bicolano vice presidential bets, Representative Leni lives and symbolizes everything that is good and honorable in being a Bicolano,” said Rep. Grex Lagman, also an LP member.

He said that ordinary people in Bicol had been consistent in their personal accounts that she “is Bicolandia’s overwhelming choice.”

Fr. Jovic Lobrigo, head of the church-based Social Action Center, said her candidacy was a welcome development “when a non-trapo (traditional politician) and reluctant candidate with solid qualifications both personal and professional comes forward.”

Though she is young in politics, Roberdo will be able to carry easily her tasks as vice president, with her knowledge as a lawyer and experiences she learned from her late husband, who was also mayor of Naga City, said tourism officer Jose Briones. With a report from Mar S. Arguelles, Inquirer Southern Luzon