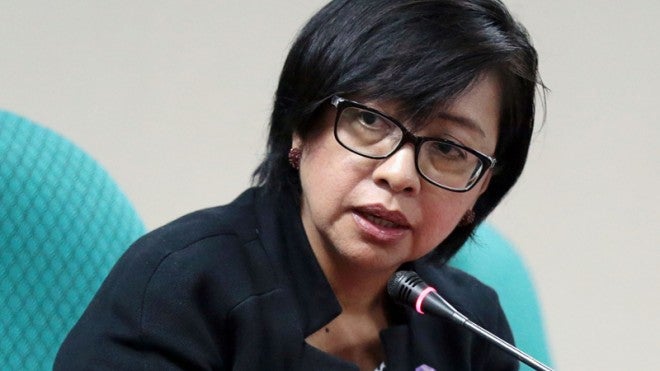 The government peace panel has urged the House of Representatives to pass the proposed Bangsamoro Basic Law (BBL) before the Asia-Pacific Economic Cooperation (Apec) leaders’ meeting in November.

In a press conference on Wednesday, panel chair Miriam Coronel-Ferrer said the passage of the bill would send the message to the Apec community that the Philippine Congress could pass a measure to address the peace situation in Mindanao.

“This is going to be our message to the Apec community that we will not squander a lost opportunity provided for by the passage of the law that will provide that kind of environment to really jumpstart peace, security and development in the region,” Ferrer said.

Ferrer said the whole world was watching and it would not be a good sign if the Philippines as a member of the Asia-Pacific region failed to pass the controversial measure.

“The whole world is watching this process. Kung mangyari ang Apec at ang message na lumalabas sa buong mundo, hindi natin masosolusyon ang kaguluhan natin dito sa Mindanao, that is not going to be a good sign to them who are really pushing for economic integration that is grounded on a very secure society of the Asia-Pacific that is able to address different security challenges and economic challenges the world is facing,” Ferrer said.

The Apec Economic Leader’s Meeting would be held in Manila from Nov. 18 to 19. The government has also declared as nonworking holidays Nov. 17 to 20.

Expected to attend are all the leaders of the 21 member-economies—US President Barack Obama, Russian President Vladimir Putin, Japanese Prime Minister Shinzo Abe, and Chinese President Xi Jinping, among other heads of states.

Ferrer urged President Benigno Aquino III to certify as urgent the bill which, if passed, would create a more politically autonomous Bangsamoro region to replace the Autonomous Region in Muslim Mindanao in the implementation of the government peace deal with the Moro Islamic Liberation Front.

If the President certifies a bill as urgent, the measure may be immediately passed on third reading the same day of the second reading approval.

Congress has suspended its plenary debates on the bill as it focuses on approving the proposed 2016 national budget bill on second reading before it goes on break on Oct. 9. It will resume on Nov. 3.

“The only window of opportunity is the next deadline, if I may call it as such, which will be in November to December. After that, it is all politics that fill the air,” Iqbal said.

He appealed for the bill to be certified as urgent, saying he found it difficult to explain to his constituents the President’s inaction on the matter.

“I appeal to the honorable members of both chambers of Congress to rise up to the occasion and be statesmen even for one moment in the history of this country. The fate of the BBL is in your hands, and history will judge you on how you dispense with the BBL,” Iqbal said.

“However, sad to say, many people including some so-called leaders of society and media practitioners are making this reconciliation very difficult to succeed. It seems they want no less than we humiliate ourselves and bow in surrender to them,” he added.

“Sometimes, we feel that this country is not really ready to extend to us the olive branch of peace.”

Iqbal said as a Bangsamoro Transition Commission (BTC) chair, he could only hope and wait for Congress to pass the bill.

“Will the BBL make it in November-December this time? I cannot answer this question; I can only hope, not do anything beyond that, because, personally, I completely stopped analyzing. The future is not for me to determine. I just do what is required of me as chairman and member of the BTC that crafted the bill,” he said. Marc Jayson Cayabyab/RC

BBL unlikely to be passed as Senate takes break–Drilon