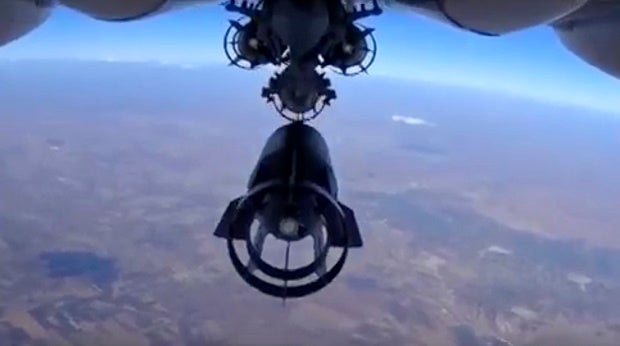 In this photo made from the footage taken from Russian Defense Ministry official web site on Monday, Oct. 5, 2015 a bomb is released from Russian Su-24M jet fighter in Syria. NATO strongly criticized the Russian air campaign in Syria that began Wednesday. AP

Meanwhile, the Turkish military has said its fighter jets were harassed by a MIG-29 plane from an unidentified country close to Syria on Sunday and Monday.

READ: Russia criticizes US for seeking ouster of Syria’s Assad

The anger over Russia’s air incursions has intensified controversy over its bombing campaign in Syria which Turkey and the West fears is aimed at keeping President Bashar al-Assad in power.

“For us, this does not look like an accident, it is a serious violation,” NATO Secretary General Jens Stoltenberg said in Brussels.

Turkey and Russia have long been at loggerheads over the Syrian conflict, with Ankara seeking the overthrow of Assad while Moscow does everything to keep him in power.

In his toughest remarks yet, the Turkish president lashed out at the incursions, saying “some undesirable steps have been taken and it does not befit Turkey to accept this.”

“It is, of course, not possible to remain patient about this,” he added on a state visit to Belgium.

Russia and Turkey have in recent years sought to step up cooperation, agreeing to build a new gas pipeline beneath the Black Sea and Turkey’s first nuclear power plant, while targeting $100 billion in bilateral trade from 2023.

But Erdogan warned that Russia risked losing Turkey as a friend if its behavior continued.

“If Russia loses a friend like Turkey with whom it has a lot of cooperation it is going to lose a lot of things. It needs to know this,” he added.

As diplomatic tensions simmered, the defence ministry in Moscow said Turkish officials had told the Russian military attache that they wanted to discuss setting up a working group between the two sides to avoid future incidents.

There was no immediate comment from officials in Ankara.

Meanwhile, Russian jets carried out air strikes on 12 Islamic State of Iraq and Syria (ISIS) sites in Syria on Tuesday, as Moscow expanded its week-old bombing campaign in the war-torn country.

In a statement, the defense ministry said Russian warplanes had carried out some 20 sorties, hitting “logistical infrastructure, command posts, training camps and bases” belonging to ISIS jihadists around the eastern city of Deir Ezzor and in the provinces of Damascus, Idlib and Latakia.

The statement made no mention of a bombing near the city of Palmyra despite Syrian state TV reporting Russian bombing raids in and around the city. The defense ministry dismissed the report as “absolute lies.”

On Sunday, jihadists had blown up Palmyra’s Arch of Triumph, prompting fresh outrage at the destruction of the UNESCO World Heritage site.

Russia says it is striking against ISIS jihadists and other terrorist groups in Syria after a conspicuous military-build up in the last weeks that raised international concern.

But the West and Turkey have accused Russia of striking at US-backed moderate rebels who have been working to overthrow Assad.

But on Tuesday, a senior Pentagon official said Russia had informally pledged to push ahead with efforts to avert potential mishaps with US pilots overflying Syria.

During talks last week, both sides agreed to a series of commitments, the source said, indicating it involved undertakings on which language pilots will use to communicate, the choice of radio frequency and the altitude at which they will operate.

The Pentagon acknowledged the move and said it hoped to hear a formal response from Russia.

The Russian operations come more than a year after a US-led coalition began bombing ISIS in Syria in a bid to destroy the group.

The advance of the extremists across Syria added to the exodus of refugees into neighboring countries, including Turkey which is now hosting almost two million Syrians.

The EU said it would step up resettling refugees now in Turkey and help reinforce Turkish coastguard patrols under a crisis plan discussed during talks with Erdogan on Monday.

Russia has acknowledged one air incursion incident into Turkey on Saturday, which it blamed on “unfavorable weather conditions.”

“There is no need to look for some conspiracy theories,” the defence ministry said of the incident, which it added lasted “several seconds.”

According to NATO, Turkish airspace was violated by Russian SU-30 and SU-24 aircraft in the southern Hatay region on Saturday and Sunday.

Meanwhile, the Turkish military said its F-16 jets were harassed and put on radar lock by an unidentified MIG-29 aircraft on the Syrian border Monday.

But it was unclear if the incident—the second of its kind in two days—was linked to Russia.

Meanwhile the Kremlin denied suggestions Russia is planning to send ground troops to Syria and said it will not support Russian volunteers willing to take part in the conflict.