Children of school-going age are forced to stay at home to care for their younger siblings
Vientiane Times/Asia News Network / 03:28 PM October 06, 2015 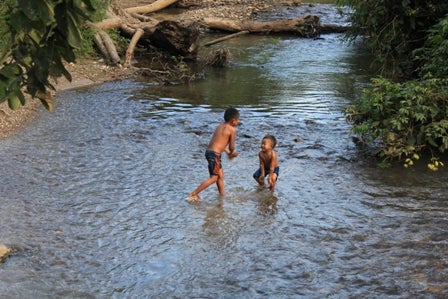 Kham lives in Hatsaphei village, Ngoi district, Luang Prabang province. He plays the role as a friend and mother to take care of his younger brother when his parents are working in the fields, often returning home after the sun sets.

At 3pm, the boy holds his younger brother’s hand to walk down to the river located near his community.

The two boys chat happily together as they cross a wooden bridge to take a bath in a nearby stream.

At the river’s side, the boy shouts to his younger brother “Why didn’t you take your clothes off to take bath?” He answers him “I am a little shy to be seen naked,” looking in the direction of a woman and two men on the other side of the river.

The lady is wearing shorts and a black t-shirt after returning from a walk through the forest. She shouts jokingly to the boy “Don’t be shy, just enjoy your bath, I will not look at you.”

She laughs louder with her friends while shouting to the boys “Both of you don’t go to the school? Where is your mother?”

His brother answers with a soft voice “My mum plants vegetables in the garden, she will come back home in the evening.”

“Then, who takes care of you and your young brother during the day?”

“There is no one, it is only me at home to cook for us and every day I will bring my younger brother to take a bath before my parents return to the house.”

“Oh you poor boy,” said the lady with a sad face. “Then why don’t both of you go to school to play with your friends?” But the boy didn’t answer and went on with his bathing instead.

The lady continued to press them a little bit. “Boys, don’t you want to go to school?”

The boy fell silent again before acknowledging reluctantly that he would like to go to school “But my mother needs me to look after my younger brother.”

The lady looked sad when she heard the answer but the boys still enjoyed taking their bath and playing together innocently, not giving a thought to their education, happy enough with the simple pleasures of the day.

Children in rural areas with poor families often have to stay home to look after their younger brothers and sisters while their parents work in their rice fields or vegetable gardens.

Aunt Mone, who is taking care of her grandson, explains, “Children in town are lucky to go to school but many kids in remote areas fail to attend school as their parents don’t have much money to support them while the schools are often far from their communities.”

“It is a normal picture that you see rural children taking care of their brothers or sisters such as cooking, bathing and playing together in the yard while their parents plant vegetables in the fields,” Aunt Mone observed.

Those children want to go to school when they see other children with the chance to gain an education but their family’s poverty leads them to stay at home to take care of their younger brothers and sisters instead.

“As you know,” Aunt Mone says while looking at her grandson, “Poor families in rural areas don’t think of an education for their children; they only think about how to survive.”

“If children don’t take care of their younger brothers or sisters, they will go to the garden with their parents. This is why you still see Kham bringing his younger brother to bath in the river.”

Some rural schools in Laos already have room to receive more students but they still fail to attend because their families are still not ready to prepare their children for school, according to an official working in the Non-Formal Education Sector (NFES) in rural areas.

Poor families in rural areas have to spend money for their children’s education such as school fees of 10,000 kip (US$1.24) per year for state primary schools, a small fee, but they also encounter fees for children’s clothes, education materials and some pocket money to buy candy at school like the other kids.

Parents without disposable incomes are therefore inclined not to send their children to school because they simply cannot afford it.

“It is a true that children in remote areas often have to stay at home to take care of young ones or help their parents in the garden. Some are also forced to leave school for these reasons too.”

Many rural children are at risk of not receiving an education if their parents don’t have permanent jobs while many rural communities suffer from a lack of state kindergartens to help farmers to look after their children.

According to the Ministry of Education and Sports’ figures, only about two-thirds of children nationwide complete their primary education, with those coming from remote villages in the most educationally disadvantaged districts facing the greatest hurdles.

Currently about 83 per cent of all children attending primary school in Laos actually completes their studies, an increase from 78 per cent last year.

However, NFES officials believe that if parents have a stable income, children will have chances to join their friends at school and won’t have to stay at home any more.

At present, the NFES sector is continuing its work to see all children in rural areas finish at least their primary education in line with the government’s policy.

This will be the biggest challenge facing the Ministry of Education and Sports and its development partners, working together with the provinces to ensure that many more children go to school and not just sit on the ground underneath their houses playing with their younger brothers and sisters.

Read Next
Laos in need of another 4 international airports
EDITORS' PICK
Metro Manila to remain under COVID Alert Level 2 until December 15
IATF tightens border control, suspends entry of fully vaxxed nationals from ‘green’ countries
Villar Group gears up for AllValue Shopping Party on Dec. 3; around P 1-million promos and discounts up for grabs
Duterte open to making jabs mandatory; Cabinet mulls ‘pressuring’ the unvaccinated
Legarda: Ending Violence Against Women, a cause for all
A delightful blessing!
MOST READ
Quiboloy warns of ‘much worse than Omicron virus’ if his ‘persecution’ is not stopped
Omicron poses ‘very high’ global risk, countries must prepare–WHO
Marcoleta defends pol ads on ABS-CBN
Bongbong Marcos’ conviction in tax case not a crime involving moral turpitude — lawyer
Don't miss out on the latest news and information.