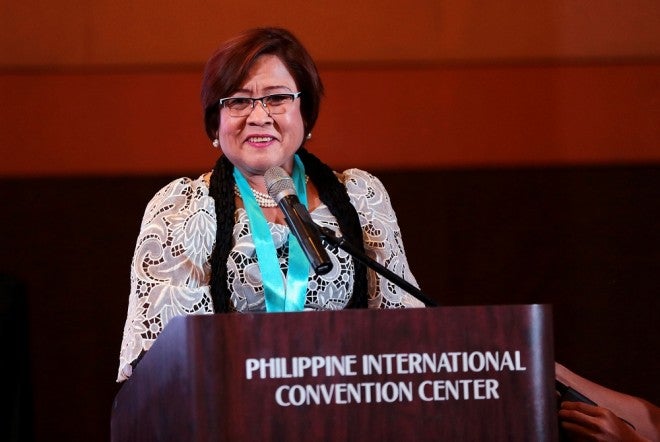 Saying she will offer herself to the electorate, Justice Secretary Leila de Lima is not keen on wooing the support of any group or religious sector including the Iglesia ni Cristo (INC) in her bid to join the senatorial race in 2016.

(If voters think that I can serve in another capacity other than being part of the Executive, I will let the electorate decide that.)

Whether or not she will exert extra effort and go out of her way to woo a particular group, de Lima said she needs to understand first if that is necessary.

(Whether or not I will be exerting extra effort and go out of my way and woo any particular group, I still need to learn that. I still need to understand if that is necessary or if it goes against my own principles.)

De Lima has been at odds with INC after she was accused by the influential religious group of giving special attention to the complaints filed against their leaders by expelled members. The aggrieved members of the group said she was violating the principle of the separation of the church and state.

De Lima will be part of the Senatorial lineup of the administration’s Liberal Party (LP). She said she will submit her resignation letter to President Aquino this week and its effectivity will be on Monday, Oct. 12.

READ: De Lima to step down as DOJ chief Oct. 12

The Justice Chief said she has mixed emotions on her decision to enter politics.

“Nalulungkot ako na iiwanan ko ‘yung position na five years ko ring sinilbihan. On the other hand, I am excited na meron akong haharapin ngayon na baong mundo,” de Lima said, adding that she is also nervous because there is no certainty if she will win.

(It saddens me to leave the position I held for five years. On the other hand, I am excited to enter a new world.)

“I am not a politician. This is my first time to enter politics. I’m not yet familiar kung ano ang mga dapat gawin (on what to do) in the course of a campaign. Now, hindi po kasi ako sanay na nakikiusap so ang general stance is inooffer ko po ang sarili ko sa electorate (I am not yet used to addressing people so my general stance is to offer myself to the electorate),” she added.

De Lima ranked 7th in the latest Social Weather Stations survey while she was also included in the list of probable winners in the Pulse Asia survey, landing in the 9th to 14th places.

If elected to the Senate, de Lima said she would focus on three advocacies namely electoral reform, human rights and reforms in the judiciary, especially in the criminal justice system.

A veteran election lawyer, de Lima also headed the Commission on Human Rights before she was appointed as DOJ secretary in 2010. IDL