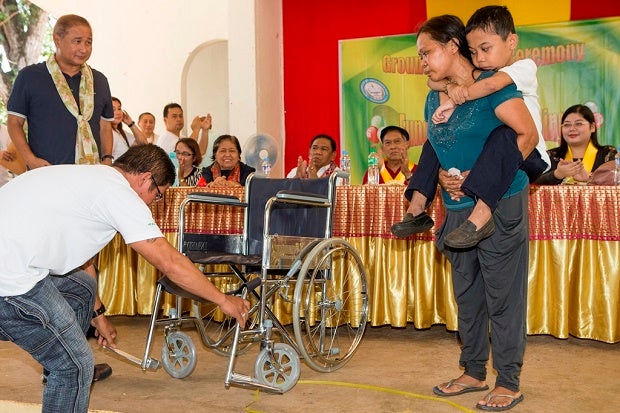 PAGCOR Chairman and CEO Cristino Naguiat, Jr. (left) fulfilled the long-time wish of ten-year-old student Jay Galupo (middle) to own a wheelchair during the groundbreaking ceremony of a PAGCOR-funded school building project in El Salvador Central School (ESCS) in Misamis Oriental. Photo and caption from Pagcor

Everyday, 35-year-old Gina Galupo hikes a muddy and forested terrain while carrying her 10-year-old son Jay on her back to bring him to school.

A fourth grader at El Salvador Central School (ESCS) located at El Salvador City, Misamis Oriental, Jay has an unknown disease which has left his lower body paralyzed for three years now. The young boy, who has never seen a doctor due to extreme poverty, has a long time wish: to be able to move around on his own and not be a burden to his mother.

During the groundbreaking rites, Jay and his mother were called onstage to receive a wheelchair from Pagcor Chairman and CEO Cristino L. Naguiat, Jr.

They could not help but shed tears of joy as Jay sat on the wheelchair for the first time.

Now, Gina need not carry her son on her back anymore. She was also thankful because agencies like Pagcor have been helping realize their dream of a better future through the agency’s school building project, which will greatly benefit ESCS.

Founded in 1920, ESCS is the oldest public elementary school in El Salvador. Most of its classrooms either need major repair or total replacement.

“Majority of our classrooms are no longer safe for use. For 95 years, ngayon lang kami makaka-tanggap ng ganito kadaming classrooms. Ganito pala ang Pagcor. Yung pera galing sa gaming, napupunta pala sa school building (For 95 years, this is the first time we will be receiving these many classrooms. This is what Pagcor does. The funds from gaming go to school building),” Pagcor quoted the school principal, Lina Bejiga, as saying. 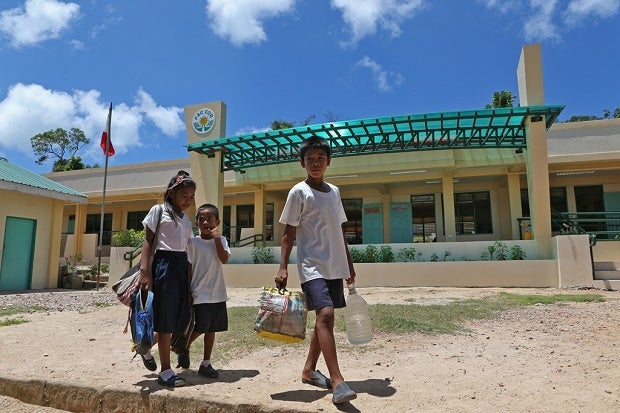 The Arpon siblings – (from left) Jonalyn, Janjan and Jerson—are among the beneficiaries of PAGCOR’s newly constructed classrooms in Maglalambay Elementary School (MES) in Busuanga, Palawan. The kids live in Papatsilon Island, which is almost an hour away via boat ride from MES where they study. Rain or shine, they would paddle their little banca (boat) just to go to school. Photo and caption from Pagcor

In Busuanga, Palawan, the Arpon siblings—Jerson, Jonalyn and Janjan—also diligently go to school everyday believing that education is their only ticket out of poverty. The kids live in Papatsilon Island, which is almost an hour away via boat ride from Maglalambay Elementary School (MES) where they study. Rain or shine, they would paddle their little banca (boat) just to go to school.

Eight-year-old Jonalyn Arpon said the meager income that her fisherman father earns was hardly enough to feed their family. Despite the odds, Jonalyn never gives up on her dream of becoming a teacher.

(I strive to study hard so I can accomplish that dream and help my parents.)

Since MES has been around for a century, many of its classrooms are already old and ruined, making learning a bigger challenge for students like Jonalyn. Making matters worse for the school was the devastation caused by super typhoon “Yolanda” in 2013. All the classrooms at MES were totally destroyed.

But with the five-classroom, one-storey building donated by Pagcor, the MES students can now continue their studies in much bigger and safer rooms.

New Busuanga Elementary School in Palawan, likewise, suffered great damage when all of their six classrooms were washed away by strong winds during the onslaught of Yolanda.

But after the school received four classrooms from Pagcor, many locals—including New Busuanga’s Barangay (Village) Captain Ardon Libarra—heaved a big sigh of relief and became hopeful once again. He viewed the new Pagcor classrooms not only as a means to improve the quality of education of their children but more so as a place of refuge where they can seek shelter whenever their areas are inundated by super typhoon.

Libarra recalled that during Yolanda’s onslaught, many people in their barangay were in the middle of open fields, risking their lives because they had nowhere to go.

(Now, we can be proud that our place has a good school. Thank you very much that you took notice of us. Not only for students but for all the people here as well. If there is a weather disturbance, we can take refuge there.)

Aside from ESCS and MES, the state-owned gaming firm is also building classrooms in 23 public schools in far-flung communities in northern Palawan, Cordillera Administrative Region (CAR) and Iligan. More than 11,000 students are expected to benefit from all these projects.

In Northern Palawan alone, Pagcor recently turned over 38 classrooms in 12 public schools in Busuanga, Coron and Culion Island. In CAR, 19 had been built in Baguio City and Benguet while 116 more will be constructed in other CAR provinces like Ifugao, Kalinga and Mountain Province. The agency will also commence the construction of a four-storey 20-classroom building in a public high school in Iligan City.

The Pagcor chief said the school building project was the agency’s “biggest legacy” to the Filipino youth.

“Through this project, we are able to reach more remote communities and send a strong message that the government goes out of its way to bring basic services—like quality education and comfortable learning venues—to those who need them most, regardless of how far they may be,” Naguiat Jr. said in the same statement.

To date, Naguiat said, Pagcor, through the help of its partners—the Department of Education and the Department of Public Works and Highways—has already completed a total of 1,772 classrooms in 363 sites. Thousands more, he said, are being built in public schools nationwide, including other areas heavily devastated by super typhoon Yolanda. Maila Ager/RAM