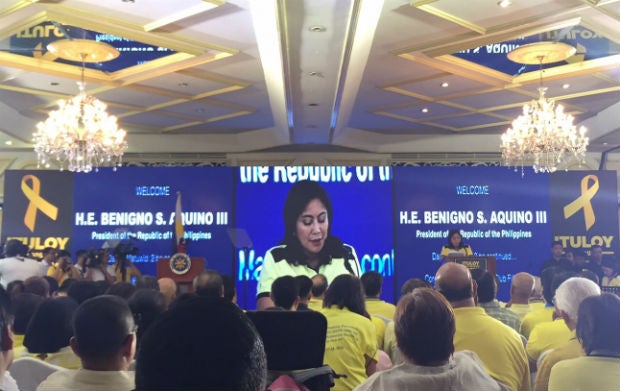 That was how a women’s group on Monday described the decision of Camarines Sur Rep. Maria Leonor “Leni” Robredo to run as the vice president of Liberal Party standard-bearer Manuel “Mar” Roxas II.

On Monday, Robredo was announced at the Club Filipino in San Juan as the running mate of Roxas in the 2016 elections.

Despite earlier pronouncements that she was hesitant to run as vice president due to her family’s opposition, Robredo accepted Roxas’ offer to be his running mate.

Furthermore, Gabriela challenged Robredo to raise the standard of campaigning and address issues on poverty, discrimination and violence against women.

Meanwhile, former partylist Rep. Rissa Hontiveros said the decision of Robredo to run as vice president is a “game-changer and a big boost in the campaign for reforms.”

“Leni Robredo’s decision to heed the call of ‘Daang Matuwid’ and run as Roxas’ vice president will greatly contribute in substantially changing the political contours of the 2016 electoral campaign,” she said.

She said Robredo “symbolizes the people’s clamor for genuine change and offers a new take on national politics untainted by traditional politics.”

“With Leni as the people’s vice presidential bet, traditional and patronage politics will have to contend with a growing reform constituency,” she said.
Hontiveros, the current PhilHealth director, said that Robredo would help in the people’s aspiration to realize universal healthcare.

“I had the opportunity to join Leni in several reform campaigns. As such, I am extremely confident that she will add her voice to the people’s call for the government to implement a universal healthcare program to provide comprehensive ‘social health protection’ to all Filipinos,” she said. JE