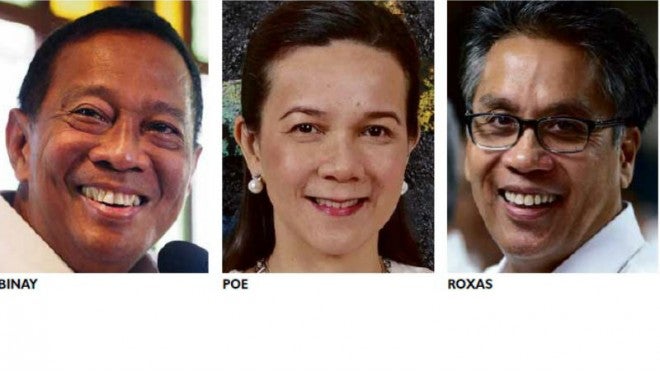 THE THREE announced candidates in the presidential election in May 2016—a former human rights lawyer, a former movie censors chief, and a former investment banker—have outlined in soaring language their hopes for a nation struggling to rise from poverty in the digital age. Presented here, in alphabetical order, are the candidates and their platforms.

Jejomar Binay, 72, Vice President of the Republic of the Philippines, former mayor of Makati City and human rights lawyer during the martial law years, envisions a propoor and probusiness administration should he succeed President Aquino in 2016.

In speeches even before he resigned from the Aquino Cabinet in June, Binay vowed his presidency would emulate the kind of governance he had led as mayor of Makati City for over two decades: “A government anchored on integrity, justice, compassion and competence; rewarding the initiatives of private businesses, while guaranteeing inclusive and lasting benefits for all the citizens, and care for the poor and the underprivileged.”

Outlining the vision of his party, the United Nationalist Alliance (UNA), Binay said he wanted to have a country “that every Filipino can speak of with pride, respected in the family of nations, maintaining peaceful and mutually beneficial relations with all, while upholding and protecting national interests.”

UNA has outlined 11 missions under a Binay presidency:

A determined effort to curb corruption in government, competence in governance and compassion for the poor.

Private enterprise must be encouraged and supported, but the benefits of economic growth must be shared by the entire citizenry.

Foreign direct investments are desirable in order to strengthen and grow the Philippine economy, but any amendments to the Constitution must give priority to our national interests.

Small businesses must be aided in accessing capital and provided guidance.

Adequate education must be provided as a right to make our citizens competitive with the rest of the world;

It is the primary duty of government personnel to render efficient, competent and courteous service to the citizenry.

Patronage and nepotism breed incompetence and corruption. Transparency is key to trustworthy governance.

The executive, legislative and judicial branches of government should remain coequal.

We must establish an enlightened foreign policy based on peaceful and friendly international relations, and the observance of alliances and international treaties.

Binay said his basic policy of governance was “anchored on competence, inclusiveness and compassion.”

“Competence refers to competent and efficient management of the bureaucracy, utilization and development of available resources, and delivery of services to the citizenry,” he said.

Leading the voter preference surveys is Grace Poe, 47, former chair of the Movie and Television Review and Classification Board, and adopted daughter of the late movie action king Fernando Poe Jr., who lost the alleged fraud-marred presidential election in 2004 to Gloria Macapagal-Arroyo.

In presenting her vision for the country, Poe anchored this on the idea of unity and inclusiveness, which she said was inspired by her father’s dream for the country.

According to Poe, her program is centered on “a simple principle and belief: that no Filipino and no region should be left behind.”

“We will rise and progress together as one nation,” she said in her speech announcing her run for the presidency last month.

She said she was inspired by her father’s dream to help the poor and the oppressed, and to build a prosperous and just society.

Her goal, she said, is to bring about reforms to achieve inclusive growth, global competitiveness, and transparent government. There should be preferential bias for the poor and the vulnerable, she added.

To make these concrete, Poe presented her position on 20 key issues, including priority on infrastructure development for which the annual budget would be increased to 7 percent of GDP. The government would also help the private sector formulate an industrialization and IT plan, so that there would be more ‘made in the Philippines’ products. This would create more jobs, she said.

She planned to maximize digital technology for education, expand the scholarship programs and strengthen the “study now, pay later” program. College students would receive assistance in finding internships and jobs so they could get experience before graduating.

Poe said she would strive to give farmers their own land, boost irrigation and push for mechanization. She would look for a program to make fishing, farming and livestock propagation profitable for the farmers and the youth.

The fight against corruption would continue, and those responsible would be held accountable, whether friend or foe, she said. She would push for a freedom of information law.

Tax rates would be brought down, but the people should see to it that they are paying the correct taxes.

Wages and benefits of workers would be examined to ensure they are fair, she said.

Poe also said she would look for ways to lower power costs and resolve the frequent brownouts in Mindanao. She would see to the development of renewable energy.

Overseas Filipino workers would receive the proper attention. The government would give them the necessary legal support and reduce the fees they pay and the red tape they face in processing their papers.

The eradication of drugs and crime is a personal crusade for Poe. She would ensure the police had the required discipline and skills to immediately deal with crime, she said.

Peace with all groups is a goal. It is time that the Moros are given equal opportunities and genuine assistance, she said.

She said she would not be blind to the conditions of the vulnerable sectors, such as persons with disabilities, indigenous peoples, urban poor, women, youth and children, the LGBT (lesbian, gay, bisexual, transgender) sector and senior citizens.

People should be able to rely on expanded benefits through PhilHealth, because families should not be driven to bankruptcy by illness.

The Philippines would protect its territory through peaceful means and according to international law. The Philippine Coast Guard and the Armed Forces would be beefed up so that they would not be intimidated by other countries.

Arts, culture, and sports would also receive proper government attention, so that the country’s skilled and talented citizens would be recognized at home and not just abroad, according to Poe.

There should be a separate Emergency Management Department that will focus on national preparedness, climate change and geomapping, she said.

More attention would also be given to the tourism industry to boost job creation. Additional infrastructure, including airports, would be built, she said.

Children, who represent the country’s future, would receive more government assistance through proper nutrition, Poe said. There should be a standard lunch program in all public schools, she added.

According to Poe, her dream is to have each and every Filipino live a complete and productive life, and one with dignity.

She outlined three strategies to achieve her goals. The first is to fight poverty and push for inclusive growth. The second is to have an open government, one that is free from corruption and respects human rights. The third is to push for a culture that would pave the way for the country’s global competitiveness.

The Aquino administration’s standard-bearer is Mar Roxas, 58, son of the late Sen. Gerardo Roxas and grandson of the fifth President of the Philippines Manuel A. Roxas. He had served as secretary of trade and the interior, and was a former investment banker in New York.

Continuity will be the cornerstone of the Liberal Party (LP) standard-bearer’s campaign, banking on the purported gains of the Aquino administration’s centerpiece governance agenda of “daang matuwid” (straight path).

Anchored on President Aquino’s popularity, Roxas and the LP-led coalition would present a platform of uninterrupted institutional reforms to curb corruption and ensure inclusive economic growth to woo voters in next year’s general elections.

“Our platform of principles is a platform of dynamic continuity; one premised on maintaining the gains and momentum of (the President’s) term and bringing it to the next level in a comprehensive and inclusive manner,” Roxas told the Inquirer.

“It is one that is arrived at through a process of deliberation and consensus,” he added.

Roxas said the LP and its coalition partners would make public their comprehensive governance principles and platform after the official filing of their candidacies.

In his speech after the President formally endorsed him on July 31, Roxas said, “We just need a government which cares for the welfare of the people and which remains faithful to its mandate … a government which quickly and readily respond to our needs; professional and not transactional.”

He said what the Filipinos needed was a government that would be able to put in place the appropriate system in attaining the nation’s goals of economic prosperity and stability.

“This has been started by the straight path. (The President) allowed us to imagine again what the Filipino is capable of,” he said. “We are a serious people who are serious with our dreams, who have just had a taste of what serious, selfless leadership can achieve.”

He said that the straight path advocacy was the embodiment of the dreams of every Filipino.

“As what the President said, it is worth fighting for. It is worth sacrificing for and dying for if need be,” he said. “The straight path transcends me and [the President]; it is a Filipino ideal that has been there long before we were born and will remain long after we are gone.”