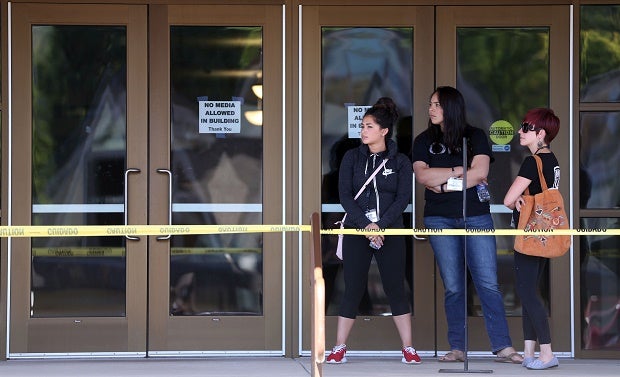 Students begin to gather at the Douglass County Fairgrounds Friday, Oct. 2, 2015, where they can retrieve personal belongings and board busses for a trip to Umpqua Community College in Roseburg, Oregon, to retrieve their cars. AP

ROSEBURG, Oregon, United States — As a 26-year-old killer gunned down victims inside a college classroom, he spared one student and gave him a package to deliver to authorities, according to the grandmother of a student who witnessed the deadly rampage in Oregon.

The grandmother, Janet Willis, said her granddaughter Anastasia Boylan was wounded in the Thursday attack and pretended to be dead as Harper-Mercer kept firing, killing eight students and a teacher.

Boylan also said the shooter told one student in the writing class to stand in a corner, handed him a package and told him to deliver it to authorities, Willis said.

Authorities have not disclosed whether they have such a package, but a law enforcement official said Saturday a manifesto of several pages had been recovered.

The official did not reveal the contents of the document but described it as an effort to leave a message for law enforcement.

The official is familiar with the investigation but was not authorized to disclose information and spoke on the condition of anonymity.

The official said the document was left at the scene of Thursday’s shooting but wouldn’t specify how authorities obtained it.

Boylan, a freshman at Umpqua Community College, also told her grandmother the gunman asked students about their faith.

“If they said they were Christian, he shot them in the head,” Willis said Friday night, citing the account given by her granddaughter.

However, conflicting reports emerged about Harper-Mercer’s words as he shot his victims.

Stephanie Salas, the mother of Rand McGowan, another student who survived, said she was told by her son that the shooter asked victims whether they were religious but did not specifically target Christians.

Her son said the shooter had people stand up before asking. “‘Do you have a God? Are you Christian? Do you have a religion?’ It was more so saying, ‘you’re going to be meeting your maker. This won’t hurt very long.’ Then he would shoot him,” Salas told AP.

Law enforcement officials have not given details about what happened in the classroom.

Harper-Mercer was enrolled in the class but officials have not disclosed a possible motive for the killings.

Harper-Mercer wore a flak jacket and brought at least six guns and five ammunition magazines when he went to the campus that morning.

The dead ranged in age from 18 to 67 and included several freshmen. They were sons and daughters, spouses and parents.

Lucas Eibel, 18, was active in the Future Farmers of America and loved to play soccer. Kim Saltmarsh Dietz was a 59-year-old whose daughter was enrolled in the same school but was not injured in the shooting.

“We have been trying to figure out how to tell everyone how amazing Lucas was, but that would take 18 years,” the family of Eibel said in a statement released through the Douglas County Sheriff’s Office.

Nine other people were wounded in the attack in Roseburg, a rural timber town about 180 miles (290 kilometers) south of Portland.

Oregon’s top federal prosecutor said the shooter used a handgun when he opened fire on classmates and had stashed a rifle in another room but did not fire it.

Several years ago, Harper-Mercer moved to Winchester, Oregon, from Torrance, California, with his mother Laurel Harper, a nurse. His father, Ian Mercer, originally from the United Kingdom, told reporters outside his Tarzana, California, home, “I’m just as shocked as anybody at what happened.”

At an apartment complex where Harper-Mercer and his mother lived in Southern California, neighbors remembered him as a quiet, odd young man who rode a red bike.

Reina Webb, 19, said Harper-Mercer’s mother was friendly and often chatted with neighbors, but her son kept to himself. Webb said she occasionally heard him having temper tantrums in his apartment.

Harper-Mercer’s social media profiles suggested he was fascinated by the Irish Republican Army and frustrated by traditional organized religion.

He also tracked other mass shootings. In one post, he appeared to urge readers to watch the online footage of Vester Flanagan shooting two former colleagues live on TV in August in Virginia, noting “the more people you kill, the more you’re in the limelight.”

The Army said Harper-Mercer flunked out of basic training in 2008.