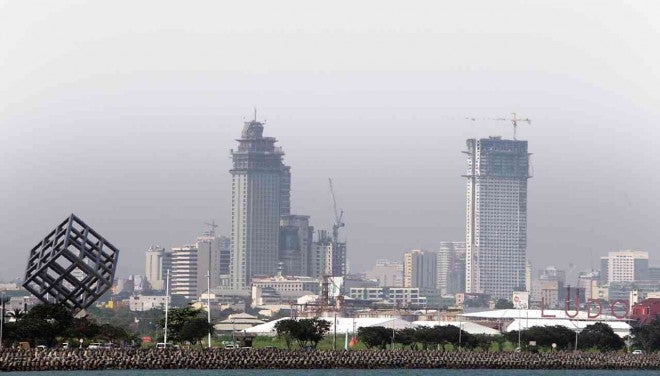 The Cebu City skyline is covered in haze that experts said reduced visibility from the usual 10 to 7 km in a phenomenon that neither environment nor weather bureau officials could explain in detail and with certainty. TONEE DESPOJO/CEBU DAILY NEWS

CEBU CITY—Haze is making its presence felt in the city, baffling environment officials and weather experts and leading to speculation that the effects of a wildfire raging in Indonesia have reached the Visayas’ most highly urbanized area.

The Department of Environment and Natural Resources office in Central Visayas and the weather bureau office based in Mactan Island could not give a definite answer to what is causing the haze.

Alfredo Quiblat, head of the Philippine Atmospheric Geophysical and Astronomical Services Administration (Pagasa) in Mactan, said the haze was noticed on Sept. 26 when visibility in Metro Cebu dropped.

He said the haze blocked the view of the city’s mountain side from the Pagasa base in Mactan.

On that day, he said, visibility that was normally 10 km had dropped to 7 km because of the haze, said Quiblat.

Quiblat said he heard that the haze was also experienced in areas in Mindanao, citing reports from Pagasa stations in General Santos City and Davao City.

One effect of the haze could be a drop in temperatures in the city, according to Quiblat.

Quiblat said one reason for the haze could be the wildfire raging in the island of Sumatra in Indonesia.

Smoke from the Indonesian fire, said Quiblat, could have been blown to the city by the southwest monsoon or habagat. He, however, said he was not sure of this.

Dr. Eddie Llamedo, DENR Central Visayas spokesperson, said there was no evidence to support the theory that smoke from the Indonesian fire had reached the city.

Llamedo said smoke from the Sumatra wildfire could not have reached Cebu City because it would have dissipated before reaching the city because of the distance between Sumatra and Cebu City.

Some city residents expressed concern that the haze might be a health hazard, especially for children.

Llamedo, however, said air quality in Metro Cebu continues to range between fair and good which meant residents could still enjoy clean air.