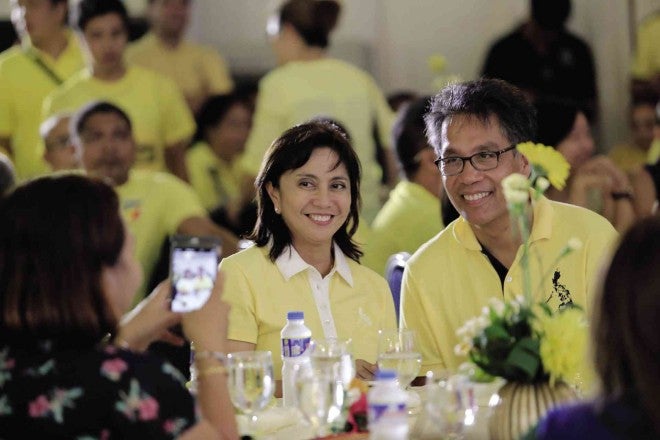 In this file photo, Camarines Sur Rep. Leni Robredo (left) and Liberal Party standard-bearer Mar Roxas attend the oath-taking of new LP members in Naga City. Anakbayan urges Robredo not to fall into the trap of Liberal Party and its “traditional politicians.”

A youth group on Friday urged Camarines Sur Rep. Leni Robredo “not to fall into the trap” of traditional politicians who supposedly want to use her good name for their own political interests.

Anakbayan said administration bet Manuel “Mar” Roxas II and President Benigno Aquino III would only use the “Robredo brand” to boost the “unpopular candidacy” of the Liberal Party (LP) standard-bearer.

“We are appealing on Rep. Leni Robredo not to squander the good name she has built for herself by siding with an administration noted for DAP and pork barrel, budget cuts for state universities, the Mamasapano carnage, MRT-LRT breakdown, neglect of Yolanda victims, among others,” Anakbayan national chair Vencer Crisostomo said in a statement.

“Traditional politicians like Roxas are like serpents in a snake pit. They will try to seduce you if they can calculate any profit and suddenly bite you if you don’t bow to their vested interests. Sayang talaga if trapos like Roxas will just take advantage of you,” Crisostomo said.

The group said Roxas’ camp, which had a “growing desperation to shore up its uninspiring performance,” would only feed on the reputation of Robredo’s late husband, former Local Government Secretary Jesse Robredo.

The ruling LP is eyeing Robredo to be Roxas’ running mate in the 2016 elections. According to party stalwarts, including Senate President Franklin Drilon, Robredo has already accepted the offer, but the neophyte lawmaker has yet to formally declare her plans.

The LP was supposed to announce its vice presidential candidate and complete its Senate slate this week, but Robredo said the Sept. 30 deadline was a bit too soon. The party is set to announce its 2016 lineup on Monday, Oct. 5. Yuji Vincent Gonzales/RC

VP offer: It ain’t over ’til Leni Robredo says it’s over