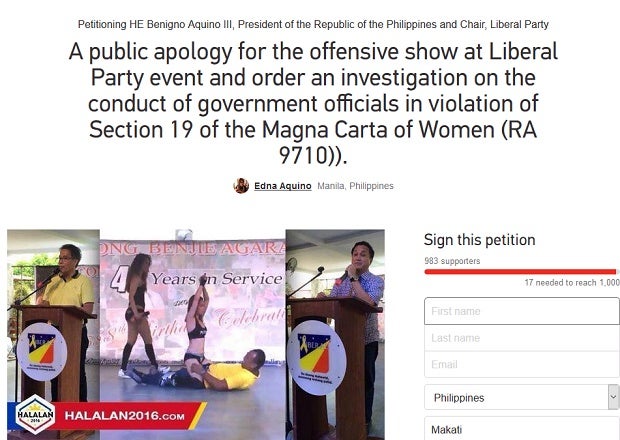 A change.org petition is calling the Liberal Party (LP) of President Benigno Aquino III to issue a public apology for an “offensive show” during a post-LP event.

The petition, initiated by Edna Aquino, said the “deplorable incident merits an apology” from Aquino being the chairperson of the LP.

“This unfortunate but deplorable incident merits an apology from your office as Head of State and as Chair of the Liberal Party on whose name, this event was held,” the petition read.

On Thursday, sexy dancers were seen dancing “lewd” performances during the birthday party of Laguna Representative Benjie Agarao against a backdrop bearing his name and greetings for his “birthday celebration” and “40th year in service.”

The emcee during the event reportedly said the dancers were Metropolitan Manila Development Authority chairman Francis Tolentino’s “surprise gift” to those who attended the gathering.

The event was held after Tolentino and other party officials joined former Interior Secretary Manuel “Mar” Roxas II on the oath-taking of 80 of its new members in Laguna.

“The entertainment at a Liberal Party oath-taking ceremony and attended by government officials presented women as sexual objects,” the petition read.

Tolentino has denied that the sexy dancers were his “surprised gift” but the petition said “eyewitness accounts from the media who were present proved otherwise.”

Citing media reports, the petition said that there were minors in the audience.

The petition called for an investigation on the officials for possible violation of Republic Act 9710 or Magna Carta for women, which prohibits all forms of discrimination against women.

The petition demanded that the Roxas, Tolentino and Agarao be investigated for the incident. If proven guilty, the petition said the officials should be held liable. Nestor Corrales/RAM