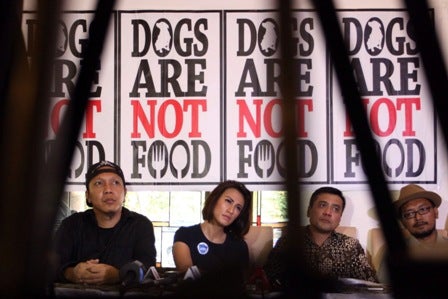 Animal welfare activists in Indonesia see the regulation of dog meat as a step towards prohibition of the dog consumption. PHOTO COURTESY OF THE JAKARTA POST

Some animal welfare organizations have applauded the Jakarta administration’s plan to regulate dog meat distribution, hoping that it could eventually lead to the prohibition of dog consumption in the nation.

With such a regulation, the city administration could monitor dog supplies for restaurants, said Justina Sukmato, spokeswoman for the animal welfare community Republik Guguk.

“I don’t agree with allowing dogs for food. That’s why I see the positive side of the upcoming regulation. Restaurant owners will not be able to take random dogs, including stray dogs, and serve them on plates,” said Justina, adding that the regulation would also control the spread of rabies.
Although frowned upon by some and considered haram by Muslims, eating dog meat is common in Indonesia and it is a customary dish for Christians of several ethnic groups including the Batak, Manado and Javanese.

In line with Justina, co-founder of the Jakarta Animal Aid Network (JAAN) Karin Franken said that regulation on dog meat distribution could contribute to the suppression of the rabies infection.

She went on to say that since 2008, JAAN had been conducting investigations into dog meat distribution in the capital. It revealed that every two days, around 40 living dogs came to the capital from Bali to be consumed. Aside from Bali, the supply of dogs in Jakarta also came from Solo in Central Java and Sukabumi in West Java.

With inter-island and inter-city distribution chains, the dogs could be easily affected with rabies, added Karen, who, along with other JAAN members, discussed the matter with Governor Basuki “Ahok” Tjahaja Purnama and his staffers in September. They also handed the authorities their investigative report.

Both Karin and Justina pledged that they would continue their “dog is not food” campaign.

Separately, Ahok said on Wednesday that his administration would regulate and monitor the distribution of dog meat, something that was previously uncontrolled, to prevent Jakartan residents from consuming diseased meat.

Marine, Agriculture and Food Security Agency head Darjamuni Taseda said that the city administration was currently preparing a draft gubernatorial regulation, which was aimed at preventing the spread of rabies in Jakarta.

“Our main purpose is to prevent the spread of rabies, therefore we will not only regulate the distribution of dog meat, but also ask residents to take good care of their dogs,” Darjamuni told The Jakarta Post over the phone on Wednesday.

Meanwhile, Jansen Basardo, the manager of a North Sumatran cuisine kiosk in Senayan, Central Jakarta, supported the administration’s policy, saying that it would control the quality of dog meat in the market.

Getting his dog meat supplies from Pasar Senen in Central Jakarta for his restaurant, Jansen said that he was never entirely sure of the quality of the meat.

Unlike pork, dog meat had no regulated quality control, including a disease-free declaration, according to Jansen. Therefore, to prevent contaminated meat, he bought meat coming from dogs which did not suffer from skin infections and boiled the meat in boiling water at least three times before serving it to his customers.