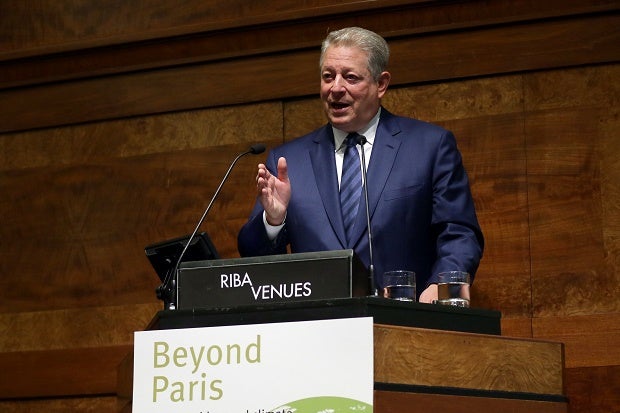 Al Gore speaks at the Beyond Paris Conference, which is a follow up to the Paris climate summit held in December, at the Royal Institute of British Architects in London, Tuesday Sept. 22, 2015. Gore called upon the UK government to take stronger action on climate change. AP Photo

MIAMI, United States—Nobel Peace Prize winner Al Gore is busily training an army of organizers to go out and spread his environmental gospel ahead of key climate talks in Paris later this year.

The modern world is collapsing around us and we must change our ways, according to the former US vice president, who has led the training of more than 5,000 people in the last 18 months.

At each session, he delivers an updated version of his Academy Award-winning documentary “An Inconvenient Truth,” using the latest news footage and startling videos to show how the very fossil fuels that have powered so much innovation are leading to the demise of society.

Air so hot it melts airport runways, floodwaters that crumble roads and bridges, methane that blows terrifying holes in Siberia and air pollution so thick it has shortened life expectancy in China by several years featured prominently during his three-hour presentation in Miami this week.

“The world that we have built was built for different conditions,” Gore told about 1,000 people who came from 80 countries to attend the three-day climate training session.

At times, he lamented killer heat waves, parching drought, a media that doesn’t connect the dots between extreme weather and global warming, and what he called “crazy short-term thinking” among politicians who deny that climate change is occurring.

“Don’t let anybody tell you that we are going to get on rocket ships and go to Mars and live in hermetically sealed buildings. We couldn’t even evacuate the city of New Orleans when a hurricane hit there,” he said.

In Florida, where sea level rise threatens the drinking water, the tourist-friendly beaches and billions of dollars in infrastructure, Gore arrived just as Monday’s super moon coincided with high tide, flooding some streets in Miami.

“The scientists have long since told us we have to change,” Gore said.

“But now, Mother Nature is saying it with water in the streets in this city.”

The Climate Leadership Reality Corps Training aims to teach people to give similar but shorter presentations in their own communities, each lasting around 20 minutes, so that they can educate others and encourage conservation and renewable energies.

Attendees in Miami were charged no fee to participate, but once their applications were approved, they were required to pay for their own food, lodging and travel.

On the second day, Gore led a panel discussion with leading scientists, including NASA expert Eric Rignot, who warned that 20 to 30 feet (six to nine meters) of sea level rise is considered inevitable, although it’s unclear when this will eventually happen.

Pressed by Gore for a more precise timeline, he said to expect at least 6.5 feet before century’s end.

Such a scenario would devour many coastal cities worldwide, but Gore counseled his followers to maintain a positive focus, citing progress in the wind and solar industries.

“Despair is paralyzing,” said Gore. “We can’t deliver that message.”

Attendee Julie Arnold, who works for NexAmp Solar in Boston, said she was moved by Gore’s talk, and had initially seen his documentary almost eight years ago.

“I think he pulled together a lot of new things I had not seen, and I am someone that reads about this constantly just being in the business and being an environmentalist,” she told AFP.

“It struck me enormously because I hadn’t realized how serious it was.”

Arnold said her plan is to learn to deliver a shorter version of Gore’s presentation to middle school and high school-aged kids, in the hopes of motivating them to make changes in their lives.

Dann Diez, who founded an organization to provide renewable energy for indigenous people, traveled from the Philippines for the conference and said he plans to continue to encourage his peers to waste less and reduce their carbon emissions.