Trump gives Putin an ‘A’ on leadership 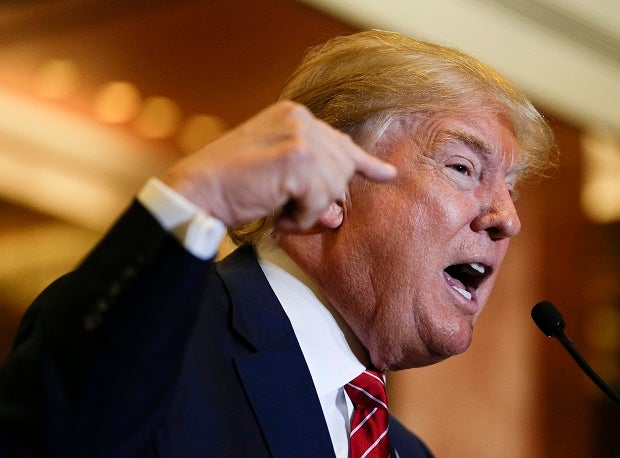 Republican presidential candidate Donald Trump talks about his tax plan during a news conference, Monday, Sept. 28, 2015, in New York. The Republican front-runner is calling for an overhaul of the tax code that would eliminate income taxes for millions of Americans, while lowering them for the highest-income earners and business. AP

NEWARK, New Jersey — One day after President Barack Obama and Russian President Vladimir Putin made little headway in their standoff over Syria at their first formal meeting in more than two years, Republican presidential hopeful Donald Trump is agreeing with Putin on his backing of Syrian President Bashar Assad.

“If he wants to fight ISIS, let him fight ISIS,” Trump said in an interview taped at his Trump Tower skyscraper in Manhattan.

The U.S. has long insisted that Syria’s future cannot include Assad. But Putin has cast Assad’s government as the best defense against Islamic State militants, a group the U.S. is also working to defeat.

Trump also suggested that Assad, who has used barrel bombs and chemical weapons against civilians, was preferable to other potential options.

“Personally, I’ve been looking at the different players and I’ve been watching Assad,” Trump said, ” … and I’m looking at Assad and saying maybe he’s better than the kind of people that we’re supposed to be backing because we don’t even know who we’re backing. We have no idea.”

Obama and Putin have a tense relationship that was on full display as the pair met at the United Nations General Assembly in New York.

Trump has long predicted that he would get along well with Putin and declared Monday that, “Putin is a nicer person than I am.” He repeated his criticism that Putin is the better leader when compared with Obama.

“I will tell you that, in terms of leadership, he’s getting an ‘A’ and our president is not doing so well,” he said. “They did not look good together.”

It was Trump’s first appearance on Fox since he announced last week that he’d be boycotting the network for “the foreseeable future” because of what he deemed unfair treatment.

The boycott lasted less than a week.