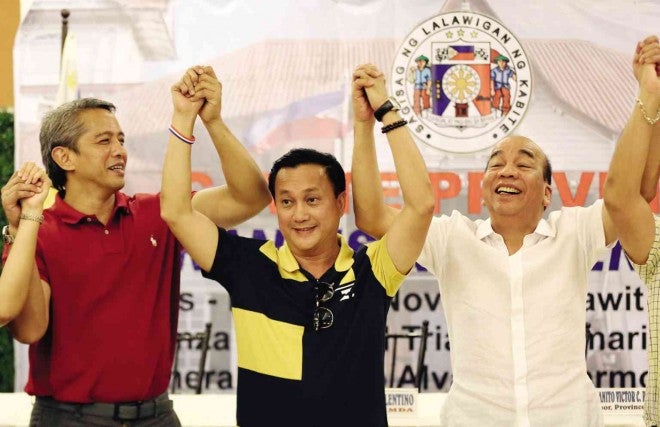 Gathering Caviteño political clan representatives from the Revillas, Maliksis and Remullas, Tolentino said his mere announcement already showed that even political rivals in his province could come together in promoting what is best for Cavite.

About a hundred supporters including Cavite Gov. Jonvic Remulla, Vice Gov. Jolo Revilla and his mother, Cavite Rep. Lani Mercado, along with other congressmen, mayors, councilors and barangay (village) officials, showed up for the event at a Manila restaurant.

The MMDA chair, who will run under the ruling Liberal Party, said he would carry the flag of Cavite in his campaign, “knowing fully well that our leaders will work hard not just for the province but also for the country.”

“I will submit my resignation to the President within the next few days,” he added in a speech.

Tolentino, a former mayor of Tagaytay City in Cavite, said he would promote the province of three million people as a friendly neighbor that can help ease the problems of the congested National Capital Region.

“It has always been my challenge every day to address the concerns of Metro Manila, with its 16.5-million population, rapid urbanization and traffic and flooding problems,” he said.

Cavite, he said, has a great potential for creating jobs outside the capital with its “massive industrialized estates,” as well as space for new airport terminals. “The solution to urbanization lies in nearby provinces like Cavite, Pampanga, Bulacan, Rizal and Laguna.” he added.

Tolentino served as Tagaytay City mayor from 1995 to 2004. He was appointed MMDA chair by President Aquino in July 2010, tasked primarily with solving NCR’s deteriorating traffic condition.

Metro Manila’s problems could be “translated to lessons learned for other fast-growing urban centers” around the country, he said. If elected to the Senate, his legislative agenda would focus on the environment and urban planning, he added.

Tolentino said he had yet to know who his replacement would be at the MMDA, saying the choice is all up to the President.