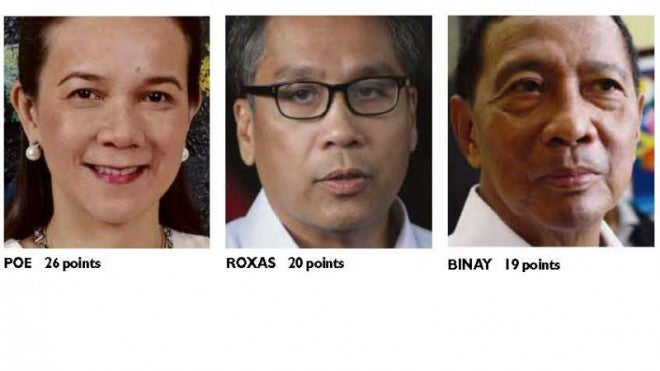 Sen. Grace Poe remains the top choice of voters for President but former Interior Secretary Mar Roxas is surging, placing him in second place from a far fourth in June, according to a survey conducted by Pulse Asia in the second week of the month.

Roxas, standard-bearer of the ruling Liberal Party (LP), is now in a “statistical tie” with Vice President Jejomar Binay and Davao City Mayor Rodrigo Duterte, according to Pulse Asia.

LP stalwarts and supporters were in a celebratory mood on Monday following the release of the latest survey results, with one saying that Roxas is the “man to beat” and another claiming that the momentum is now on the side of the LP standard-bearer.

Twenty-six percent of the 2,400 respondents said Poe was their choice for President, if the elections were held this month.

The survey, conducted from Sept. 8 to Sept. 14, had a margin of error of plus-or-minus 2 percentage points.

Respondents were asked the question, “Of the people on this list, whom would you vote for President of the Philippines if the 2016 elections were held today and they were candidates?”

Poe was grateful anew to the people following her continued lead in surveys.

“It is from them that I draw my strength. More than just a measure of popularity, this is a reminder that we should always focus on performance and genuine service,” Poe said in a statement.

Roxas thanked his supporters for the surge in his rating from June.

“I’m thankful for the trust that the people have given me,” he told reporters after addressing the convention of the National Unity Party (NUP) at Sofitel Philippine Plaza Hotel in Pasay City.

“I take this (as a show of support) not only for me, but for daang matuwid (straight path) which we are pursuing and defending as we continue to expand it,” he said, referring to the Aquino administration’s centerpiece anticorruption program.

“This also proves that our constituent[s] trust the straight path and President Aquino. They have seen and felt the progress we have experienced in the past years and they want to continue it. That’s how I look at the (survey) numbers.” 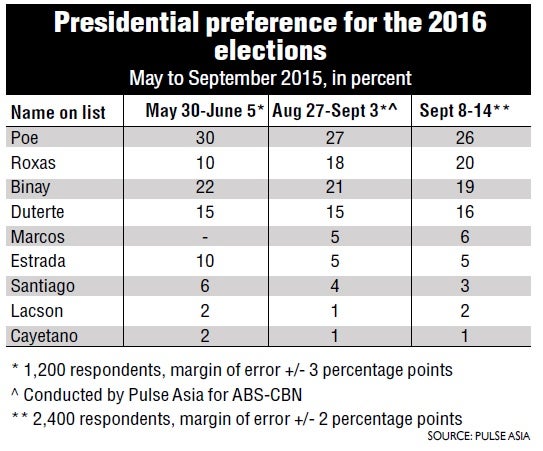 Asked about the significance of the President’s anointment to his presidential bid, the former interior secretary said: “It’s very important.”

“The people believe in the leadership of the President. They themselves witnessed the improvement in their lives,” Roxas said.

Reacting to the survey, Binay said the situation was fluid considering the different results in recent surveys on voters’ preferred presidential candidate.

Asked whether he was threatened by Roxas’ continued climb in the surveys, the Vice President said he was a presidential candidate.

“If anything, I would continue to work hard and explain to the people,” he told reporters after he spoke at the NUP convention.

Sought for comment, Duterte said, “I do not care about surveys. I could be No. 1 tomorrow, but that will not convince me to run.”

Binay and Roxas, along with Marcos, were at the convention to woo members of the NUP—a political party headed by former Interior Secretary Ronaldo Puno, which aligned itself with the LP when Aquino came to power in 2010. Puno himself made a rare appearance in public, attending the convention.

Binay and Roxas did not see each other at the convention because the Vice President spoke ahead, some two hours before Roxas.

The NUP also invited Poe to attend the convention but the senator said she had told party officials as early as last week she would be unable to join them.

“We already met a few weeks ago and we’ve presented our platform of government to the public last Sept. 16,” Poe said, referring to the platform she presented when she declared her run for the presidency.

At the NUP convention, Roxas seemed to be the favorite of the party given the enthusiastic welcome it gave him, with one official introducing him as the “Aswang of Capiz.” Roxas hails from Capiz province, a place, according to the superstitious, where many aswang (a monster in Philippine folklore) can be found.

Roxas himself said he must be NUP’s choice for President considering that many of the party members stayed behind to listen to him speak, when he was the last speaker—eliciting cheers from the audience.

In his speech, he said the Aquino administration, in keeping with the daang matuwid policy, had been fair in giving out projects “without questioning what was the vest of the political leadership in the area.”

He said that since 2009, the capital outlay, which included the funds allocated for NUP lawmakers, and that for this year, amounted to P580 billion.

Roxas urged the party to continue its alliance with the LP beyond 2016. “I am asking for your sweet yes so that the daang matuwid can be continued in 2016.”

For his part, Binay gave NUP a preview of his administration and crowed about his ability as an executive to implement his programs.

In the House of Representatives, Iloilo Rep. Jerry Treñas, chair of the LP membership and organizing committee, said Roxas was the man to beat.

He said the huge jump in Roxas’ rating should put him on the top spot if one were to take into account the ruling party’s political machinery and strong alliances with other parties.

“Roxas is now the top candidate among the front-runners because he has the LP as a political party. We are not only the biggest political party in the country but we are also the most organized,” he said.

“The momentum is now on the side of Secretary Mar at 20 points, an increase of 100 percent, while both Senator Poe and VP Binay dropped,” he said.

“My prediction is Secretary Mar surpassing Senator Poe by the next quarter’s survey,” Erice said.

Treñas said the LP’s political organization would not only guarantee its candidates’ presence in the remotest barangays (villages) “but it will also ensure that all polling precincts are well-manned to protect their votes.”

Asked about the results of the survey, Akbayan Rep. Barry Gutierrez, whose party is in a coalition with the LP, said, “This is the fourth poll in the past week that establishes a phenomenal increase in Secretary Mar’s numbers.”

Gutierrez said Roxas’ showing in the survey should erase any “lingering doubts” about the effectiveness of his campaign, following President Aquino’s endorsement in July.

“We remain humbled and grateful for the unceasing support of so many of our fellow Filipinos for Sec Mar and the daang matuwid in their unbending commitment to serve the Filipino people,” he said.

“I think what is going to benefit him more is the fact that he’s with the administration,” said Abad, citing what he called the “advantage of incumbency.”

Parañaque Rep. Gustavo Tambunting, a supporter of Binay, said the survey showed that the 2016 presidential race would be close as all candidates were “bunched up.”

“There will still be movements up and down. But what’s interesting is Poe’s share has gone down, which means she is not unstoppable after all,” Tambunting said.—With a report from Inquirer Research

Read Next
Dumagat chiefs hit quarrying in Aurora
EDITORS' PICK
Acer Philippines welcomes you to its first flagship store
New Year, New Rediscoveries
Biden says Covid-19 expected to kill ‘well over 600,000’ in US
UP president challenges AFP claim on Reds’ campus infiltration
WHO says fabric facemasks still work against virus variants
Is your company a growth champion? Stand up and be recognized!
MOST READ
Cop, 12 others killed in Maguindanao shootout
Ate Vi’s message to those against ABS-CBN’s franchise renewal
NBI files raps vs top execs of 2 tech firms
OVP spokesman tells Mocha Uson: Don’t drag us into your nonsense
Don't miss out on the latest news and information.