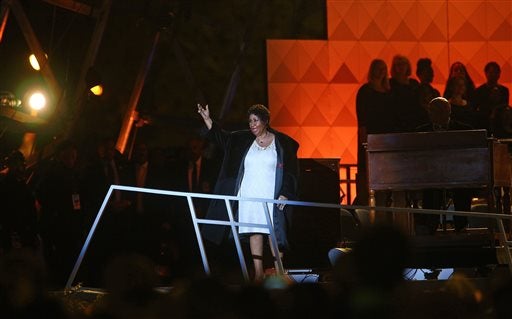 PHILADELPHIA—Pope Francis and an admiring throng of thousands enjoyed a little music from the Queen of Soul Aretha Franklin, Italian classical tenor Andrea Bocelli and other pop stars at the end of his first day in Philadelphia on his first-ever US tour.

Franklin led an all-star lineup at the Festival of Families, one of the events organized by the Vatican-sponsored World Meeting of Families, which brought Francis to the city after visits in Washington and New York.

The festival included song, prayer and testimonials from people from different continents on the joys and challenges of family life, including an Argentine couple celebrating their 60th wedding anniversary.

After each family spoke, the Pope greeted and spoke with them, and later addressed the crowd at length about the importance of families, urging people to take special care of children and grandparents.

“In the family, there are difficulties, but those difficulties are overcome with love,” he said through an interpreter. “Love is about celebration, love is joy, love is moving forward.”

Wahlberg credited his Catholic faith and a parish priest for turning him around after a rough upbringing in Boston that included cocaine addiction and a series of racially motivated attacks as a teenager.

“I attribute all of my success to my Catholic faith,” he told the crowd. “My faith has given me the ability to be a good father, a good husband and most importantly, a good person.”

Soprano Bobby Hill, 14, of the Keystone State Boychoir sang “Pie Jesu” by Andrew Lloyd Webber, and presented Francis with a rock that the choir brought back from its trip to Antarctica.

After his opera solo, Hill told Wahlberg that he liked the actor’s performance in the movie about an angry talking teddy bear.

“He (Hill) whispered in my ear that he liked the movie ‘Ted,’” Wahlberg said. “I told him that was not appropriate for his age. Holy Father, please forgive me.”

The Boston-born actor, who also played Vince Papale in “Invincible,” a film about a real-life walk-on who signed with the Philadelphia Eagles in the 1970s, also gave a “Go Eagles!” cheer from the stage.

Franklin, best known for her hit “Respect,” performed “Amazing Grace.” The 73-year-old Queen of Soul said earlier she planned to present Francis with a gift: a box set of sermons by her father, civil rights activist and preacher C.L. Franklin.

She later came out and performed “Nessun Dorma” from Giacomo Puccini’s opera “Turandot,” which she intended as a surprise, but the Pope had left by the time of her encore.

Bocelli, whose rendition of “The Lord’s Prayer” was accompanied by The Philadelphia Orchestra and the Philadelphia Heritage Chorale, described Francis as “a blessing given to the world.”

“This journey represents for the United States a precious opportunity to embrace this giant, a man of God, a gift from heaven, a point of reference and a providential source of hope for our world,” said Bocelli, who also sang another song after the Pontiff left.

Before Francis’ arrival, Sister Sledge performed a special rendition of the hit “We Are Family,” adding another gender to proclaim, “I’ve got all my sisters and my brothers with me,” and referring to Jesus as “the Way, the Truth, the Light.”

Comedian Jim Gaffigan also entertained the crowd before the Pope’s arrival. The 49-year-old Gaffigan attends Mass weekly with his wife and five children and regularly references his Catholicism in his stand-up and on his TV Land sitcom.