A million expected at Pope Francis’ last Mass in US 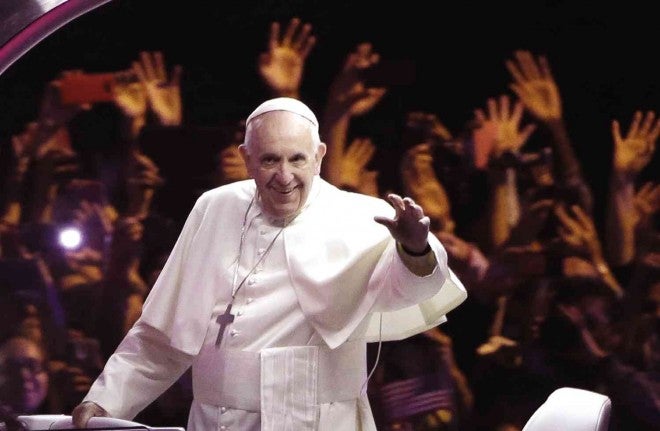 ROCK STAR Pope Francis waves to the crowd from his popemobile during a parade in Philadelphia on Saturday. AP

PHILADELPHIA—Pope Francis is capping his whirlwind visit to the United States in a fitting way—Mass for the masses on Philadelphia’s grandest boulevard.

The 78-year-old “people’s pope,” who seems to feed off the energy of the crowds, is expected to see the largest of his six-day tour on Sunday when he celebrates an outdoor Mass on the Benjamin Franklin Parkway at 4 p.m. (4 a.m. in Manila).

It’s the culminating event of a Vatican-sponsored conference on the family that drew the wildly popular pontiff to Philadelphia.

The pope begins his day by speaking to bishops from around the world. He’ll also visit inmates at Curran-Fromhold Correctional Facility, Philadelphia’s largest jail.

Francis, who also visited Washington, D.C., and New York during his first-ever trip to the United States, flies back to Rome on Sunday night.

As early as noon crowds formed early on Philadelphia’s Benjamin Franklin Parkway for another papal parade and the outdoor Mass.

Visitors were already packed in as tight in the front of the viewing section as they were for the start of closing festival Saturday of the World Meeting of Families.

And long backups were occurring at security checkpoints.

It was an early sign that the 4 p.m. Mass is likely to draw the biggest turnout of the pope’s US visit.

Philadelphia’s mass transit agency reported increased ridership on special papal trains heading into the city. More than 500 buses carrying 26,000 people had arrived by 11 a.m., nearly half of the shuttles organizers expect for the Mass.

Security officials were urging visitors to get to the checkpoints as early as possible to avoid last-minute bottlenecks.

Before noon, after encouraging a group of prisoners to get their lives back on track, Pope Francis walked through the gym at Philadelphia’s largest jail and shook the hands of each of the men and women individually.

The 100 inmates in blue uniforms remained in their seats Sunday until two stood up near the end to hug Francis. He also blessed an inmate in a wheelchair.

Francis thanked the inmates at the Curran-Fromhold Correctional Facility for the large wooden chair that they made for him, calling it beautiful.

He has criticized prison systems that only work to punish and humiliate prisoners, and he has denounced life prison terms and isolation as a form of torture.

Pope Francis invoked the parable of Jesus washing the feet of His apostles as he encouraged a group of prisoners to use their time in jail to get their lives back on track.

Francis said at Philadelphia’s largest jail on Sunday that everyone is part of the effort to help the inmates rejoin society.

A Philadelphia Archdiocese priest had been jailed there for his handling of priest sexual-abuse complaints, but Monsignor William Lynn was moved to a state prison in northeastern Pennsylvania shortly after the pope’s itinerary was announced.