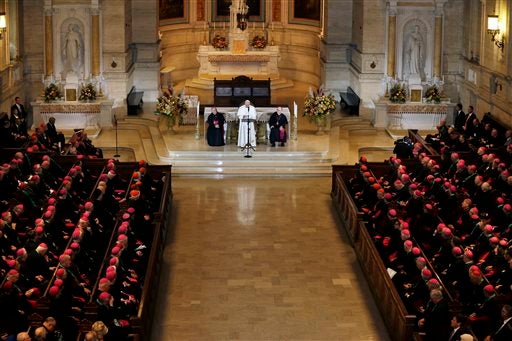 PHILADELPHIA—Pope Francis met on Sunday with victims of church sex abuse, saying “God weeps” for their suffering and promising to hold all those responsible to account.

The pope met three women and two men, with their relatives and educators, for 30 minutes at the San Carlo Borromeo Seminary on the final day of his visit to the United States, the Vatican said in a statement.

“God weeps,” the pope told a gathering of bishops afterwards. “The sexual abuse of children cannot be maintained secret.

“I commit to a careful oversight to insure that youth are protected and all responsible will be held accountable.”

“Those who have survived the abuse have become true heralds of mercy, probably we owe each of them our gratitude for their great value as they have had to suffer terrible abuse,” he added.

Philadelphia is one of the cities where the scandal was most serious in the 1980s.

One rare criticism of the pope during his six-day trip to Washington, New York and Philadelphia, which ends on Sunday with a giant open-air Mass, was that he did not have such a meeting on his public agenda.