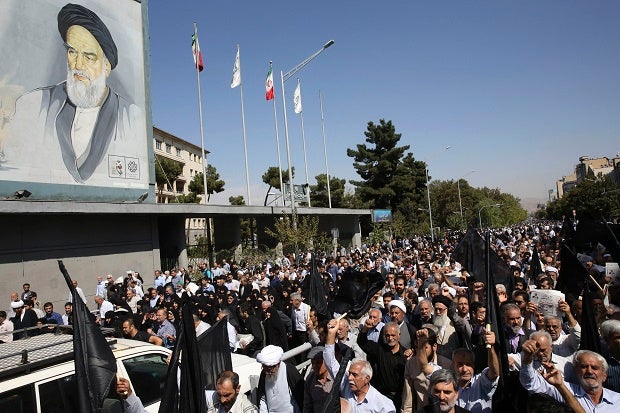 Iranian worshippers attend an anti-Saudi protest rally on Thursday, after their Friday prayer service in Tehran, Iran, Friday, Sept. 25, 2015. Thousands of Iranian worshipers have marched in Tehran after Friday prayers to denounce the “incompetency” of Saudi Arabia in handling the annual hajj pilgrimage. The protest came a day after at least 719 pilgrims died during a crush on the outskirts of the holy city of Mecca. A mural of the late Iranian revolutionary founder Ayatollah Khomeini is seen on the wall. AP

TEHRAN, Iran — Iran on Saturday vowed to take international legal action against Saudi Arabia’s rulers over the crush of Muslim pilgrims at this year’s hajj, which killed at least 769 people, including 136 Iranians, and has led to an escalation of tensions between the regional arch rivals.

The pilgrims suffocated or were trampled to death Thursday when two massive crowds converged on a narrow street, in the worst disaster to occur during the annual pilgrimage in a quarter-century. Shiite Iran has accused Sunni Saudi Arabia of mismanaging the pilgrimage, which annually draws some 2 million people from 180 countries.

He said Saudi authorities blocked a road used by hajj pilgrims to allow a royal convoy to pass through, causing the deadly convergence in the town of Mina on the outskirts of Mecca.

“They have to know that we will pursue the trial of Al-Saud for the crime they have committed against the hajj pilgrims through international courts and organizations.”

Neither Iran nor Saudi Arabia is a state party to the International Criminal Court, and only the court’s prosecutor can file charges. Iran could try to file a case at the International Court of Justice, which handles disputes between nations but does not mete out criminal justice.

Saudi Arabia has not responded to the Iranian accusations regarding the convoy. Saudi Interior Ministry spokesman Maj. Gen. Mansour al-Turki told The Associated Press that a VIP convoy traveling through Mina on Thursday, which included foreign dignitaries, had nothing to do with the incident and was in a different part of town. He said VIPs use their own roads in Mina.

Iran and Saudi Arabia are bitterly divided on a host of regional issues and support opposite sides in the wars raging in Syria and Yemen. The accusations of mismanagement of the pilgrimage strike at a key pillar of the Saudi royal family’s prestige — King Salman holds the title of the “custodian of the two holy mosques.”

Iran’s President Hassan Rouhani began an address to the U.N. General Assembly on Saturday by expressing “regret over the heart-rending incident,” emphasizing the “need for swift attention” to an investigation into “this incident and other similar incidents in this year’s hajj.”

Rouhani told a group of editors Friday that both the stampede and the collapse of a crane on the Grand Mosque in Mecca earlier this month — which killed another 111 people — suggested “ineptitude” on the part of Saudi authorities.

Iran’s Foreign Ministry meanwhile summoned the Saudi charge d’affaires for a third time in three days to protest Riyadh’s handling of the disaster. State TV said Saudi Arabia has yet to issue visas for an Iranian delegation to visit the kingdom to oversee the treatment of injured Iranians and the repatriation of remains.

The Saudi Health Ministry said Saturday on Twitter that the toll from the hajj disaster stood at 769 pilgrims killed and 934 injured, updating previous figures. It did not provide the nationalities of the dead and injured.

Iranian state TV said 136 Iranian pilgrims were among the dead and 85 were injured, while 344 Iranians remain missing.

The hajj is one of the five pillars of Islam, and all able-bodied Muslims are required to make the pilgrimage to Mecca at least once in their lives.

On Saturday, the final day of the hajj, pilgrims streamed into Mina’s Jamarat, a multi-story complex with crowd-monitoring technology and wide ramps for large crowds to perform the final rites of the pilgrimage.

Muslims believe the devil tried to talk the Prophet Ibrahim, or Abraham as he is known in the Bible, out of submitting to God’s will in Mina. In one of the final steps of the hajj, pilgrims throw stones at three large pillars in a symbolic casting away of evil.

Saudi security forces were on hand to spray pilgrims with water to help keep them cool as temperatures reached 100 degrees Fahrenheit (38 degrees Celsius). Large fans were also set up to spread mist.

Sudanese pilgrim Abdullah al-Muzbahi, 42, stood to the side in Jamarat with his hands outstretched in supplication and prayer after completing the stoning ritual. He said that from his perspective, this year’s hajj went smoothly and that Saudi officials appeared to be doing all they could to safely manage the pilgrimage.

“The problem is in the culture of pilgrims, who are not organized or patient,” he said.

Saudi pilgrim Misfir al-Yami, 28, said the large crowds should be directed better to reach certain holy sites in smaller waves. He said it is the responsibility of both the security forces and the pilgrims to ensure the hajj is safe.

Syrian pilgrim Samar Zaki, 37, said there were times when she was in the midst of very large crowds that she worried for her safety.

“There are times when it is challenging,” she said. “I saw (news) about the accident that took place and it made us all very upset.”