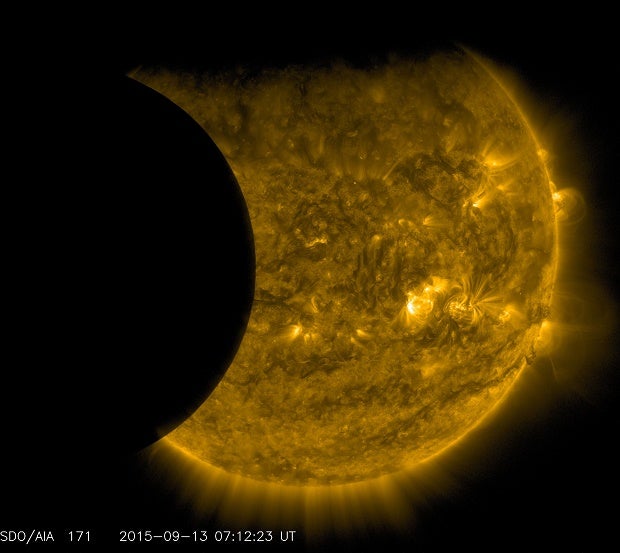 This Sept. 13, 2015 image provided by NASA shows the moon, left, and the Earth, top, transiting the sun together, seen from the Solar Dynamics Observatory. The edge of Earth appears fuzzy because the atmosphere blocks different amounts of light at different altitudes. This image was taken in extreme ultraviolet wavelengths, invisible to human eyes, but here colorized in gold. A total lunar eclipse will share the stage with a so-called supermoon Sunday evening, Sept. 27, 2015 as seen from the United States. That combination hasn’t been seen since 1982 and won’t happen again until 2033. AP

A total lunar eclipse will share the stage with a so-called supermoon Sunday night or early Monday, depending where you are. That combination hasn’t been seen since 1982 and won’t happen again until 2033.

When a full or new moon makes its closest approach to Earth, that’s a supermoon. Although still about 220,000 miles away, this full moon will look bigger and brighter than usual. In fact, it will be the closest full moon of the year, about 30,000 miles closer than the average distance. (The moon’s orbit is far from a perfect circle.)

NASA planetary scientist Noah Petro is hoping the celestial event will ignite more interest in the moon. He is deputy project scientist for the Lunar Reconnaissance Orbiter, or LRO, which has been studying the moon from lunar orbit since 2009.

“The moon’s a dynamic place,” Petro said Wednesday. “We’re seeing changes on the surface of the moon from LRO. We’re seeing that it’s not this static dead body in the sky … it’s this great astronomical object that we have in our backyard, essentially. So people should get out and start looking at it.”

Many stargazers, professional and amateur alike, dislike the term “supermoon,” noting the visible difference between a moon and supermoon is slight to all but the most faithful observers.

“It’s not like the difference between an ordinary man and Superman,” said Alan MacRobert, a senior editor at Sky & Telescope magazine. “It really ought to be called a tiny, slightly little bit bigger moon, rather than the supermoon.”

The full eclipse of the moon will last more than an hour and be visible, weather permitting, from North and South America, Europe, Africa and western Asia. Showtime on the U.S. East Coast is 10:11 p.m. EDT (0211 GMT); that’s when the moon, Earth and sun will be lined up, with Earth’s shadow totally obscuring the moon.

In Europe, the action will unfold before dawn Monday. No matter where, the preshow will begin two hours earlier.

There won’t be another total lunar eclipse until 2018.

This eclipse marks the end of a tetrad, or series of four total lunar eclipses set six months apart. This series began in April 2014.

Observatories are marking the celestial event with public telescope viewing, although magnifying devices won’t be necessary; the eclipse will be easily visible with the naked eye. Astronomers are urging stargazers to simply look to the east.

In Los Angeles, Griffith Observatory also will serve up Beethoven’s “Moonlight Sonata” on the piano and other moon-themed music.

NASA will provide a live video feed of the entire eclipse — an option in case clouds obscure your own view.

Look up in the sky… it’s Supermoon