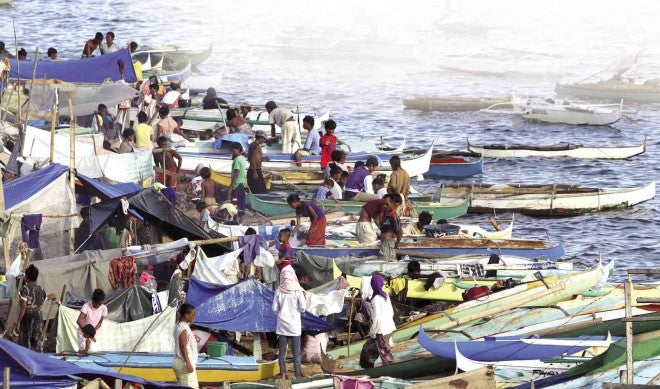 How would you count boat-dwelling families belonging to an indigenous sea tribe in a “house-to-house” government census?

The monthlong nationwide census undertaken by the Philippine Statistics Authority (PSA) ended on Sept. 8, but there is little assurance that the Badjao people of Mindanao and the Sulu Sea and the rest of the country’s territorial waters were all counted, according to the PSA in the Autonomous Region in Muslim Mindanao (ARMM).

Enumerators in daily pursuit did the counting rigorously and were able to include seafaring Badjao families, but only “when their boats get to the shore,” said Hadji Abdul Hakeem Suod Barodi, acting PSA regional chief.

Island residents have raised concerns that the government hardly counted the seafaring Badjao, which they describe as an “endangered transnational tribe,” for inclusive demographic Philippine development plans.

The Badjao are part of the “transnational” Sama-Bajaw that have flourished among the Sama Moro tribe in Tawi-Tawi, said education development worker Noor Saada, a Tausug native of the province.

They are called “Sama Abaknon” in Western Samar, “Sissano” in Papua New Guinea, “Orang Laut” in northern Indonesia, Singapore and mainland Malaysia; and “Bajaw” in Maluku (Indonesia) and beyond territorial waters of Indonesia.

The families of sea gypsies are also found in Mindanao and the Sulu Sea, the Moro Gulf, Davao Gulf and Illana Bay.

“Within the frame of the transnational Sama-Bajaw configuration are scattered numerous Sama-Badjao communities united by a set of intertwined histories, core cultural values and practices, and a maritime ecology,” Saada said.

Saada, who heads the ARMM Integrated Project Management Office, said Gov. Mujiv Hataman wanted the ARMM government to share its development resources with at least the Badjao communities of the region. But even if the region had resources and means to spur on social development efforts on the seafaring tribe, initiatives would have to start with accurate data on their numbers, population distribution and development concerns.

Foreign nongovernment organizations have placed at 26,400 the population of the Philippine Badjao (monolingual) in Eastern Visayas, Northern Samar, San Bernardino Strait, Capul Island, San Isidro Island and Manila. From the same unofficial record, their population has had a moderate increase of 300–500 yearly.

Datu Habib Maulana, a Tausug-Maguindanaon resident of Tawi-Tawi, said poor living conditions and lack of access to social services in urban areas—where some have turned to begging for a living—had exposed the land-transient Badjao families to poverty and killer diseases.

“Under threat of extinction, they will be out of the national consciousness … some, for instance, have been altered, with a new name-label, ‘Isma,’ in the Davao Gulf,” Saada said of the transient sea tribe.

Their traditional fishing grounds are now being dominated by corporate fishing, he said. For instance, Palawan province’s Tubbataha Reef is an ancestral sea territory of the Badjao, he said. Foreign colonial powers apparently corrupted the term “tabba-taha,” which, in Badjao, means, “shallow water.”

On Bongo Island in Parang, Maguindanao province, a few families of fishing Badjao were said to have experienced indifference in the treatment of some native Iranun, who controlled the fishnets of the municipal waters.

In some cases, their boats capsized to big waves generated by fast foreign vessels, anywhere from the Mindanao Sea and Sibutu Strait to the Sulu and Celebes seas.

Malaysian authorities used to allow Badjao people to fish in Tanjung Labian, a rich fishing ground some 10 nautical miles from Sibutu, Tawi-Tawi. But a government restriction came after the bloody skirmish in Lahad Datu, Sabah, in March 2013, said Alexander Bonajal, president of a local people’s organization in Sibutu.

“There is high mortality rate, although undocumented, especially women, and children, ages 5 and below, among the land-transient Badjaos,” Maulana said.

Extreme poverty and the changes in their environment are turning the Badjao into an endangered tribe, Saada and Maulana said. 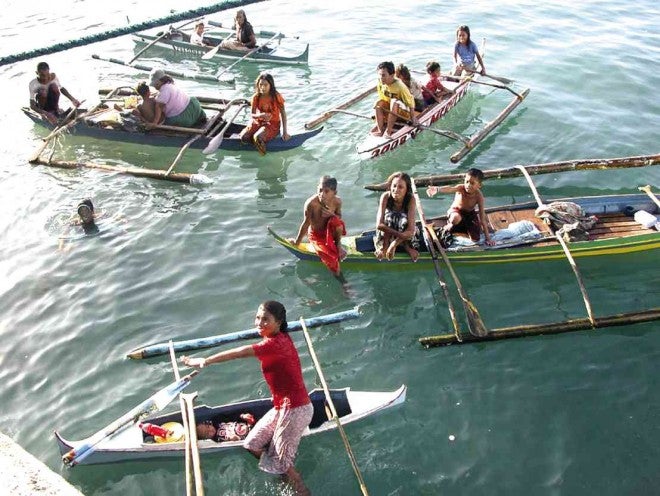 SOME members of the sea tribe have found their way off the Talao-Talao pier in Lucena City, Quezon province, begging for coins from passengers of Marinduque-bound ships. DELFIN T. MALLARI JR./INQUIRER SOUTHERN LUZON

The families of Liasan Abbay and Maaji Harnain are among the few Badjao integrated into a small community in Sanga-Sanga village, a few meters from the blue waters of Bongao, Tawi-Tawi.

Mothers among them were given an education program through a World Bank-ARMM-designed alternative learning system composed of literacy and livelihood programs, Abbay and Harnain said in Sanga-Sanga.

But Harnain, president of Kasambulan sin Kauman Pagasinan Tribal Groups (Federation for Livelihood of Pagasinan Tribal Groups), said the “integration” with other tribes, such as the Tausug in the community, had often been “unstable,” that a slightest sign of indifference could send a Badjao family back to sea dwelling.

Few Philippine anthropologists have devoted time to study the characteristics and social makeup of the Badjao. But by long experience in practically learning their ways, island residents said young members of the sea tribe tend to get corrupted the farther they go from the sea as land-based transients. They have become vulnerable to human trafficking, prostitution, and child and women abuse.

Saada said some studies showed that the Badjao were aloof with other larger tribes. “That is why one venue seen by Governor Hataman to break that barrier is to involve them more closely in ARMM development dialogues, making them and their way of life a major part of the culturally illustrative convergence of tribes at the mock villages (on the grounds of the Regional Government Center in Cotabato City),” Saada said.