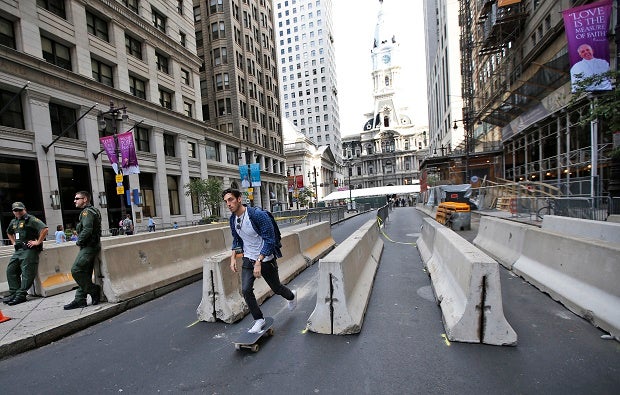 A man on a skateboard rides through a security checkpoint on Broad Street with City Hall in the background in Philadelphia on Friday, Sept. 25, 2015, before Pope Francis’ upcoming visit. AP

Concrete barriers, steel fencing and rows of portable toilets lined streets in the vehicle-free zone that went up overnight around the Benjamin Franklin Parkway, where Francis will participate in a festival Saturday and celebrate Mass on Sunday.

Walking to some areas required passing through airport-style metal detectors, where agents were flagging banned items, such as pocket knives and shaving cream canisters, or walking several blocks out of the way to avoid the security zone.

Packs of pilgrims in colorful shirts dotted the sidewalks. On an empty Market Street, downtown’s primary thoroughfare, a man threw a football to friends and people posed for selfies. In some places, law enforcement outnumbered civilians.

The National Guard was bringing in about 3,000 soldiers and airmen to help with traffic control.

“There is a feeling of anticipation and it’s great to be part of it,” said Tina Miles of Bethlehem, Pennsylvania. “Very exciting to be here.”

Filipina Opena, 46, of La Mirada, California, was born and raised in the Philippines.

“Having him as the pope right now really strengthens the Catholic church throughout the world — his message of hope, of compassion, of acceptance of others,” said Opena, a Catholic real estate consultant. “He opens himself up to everybody.”

The National Weather Service forecast partly cloudy skies with temperatures in the high 70s on Saturday and a 30 percent chance of rain on Sunday.

Many downtown offices were closed Friday or had employees working from home in advance of the closures, sapping some restaurants of their usual clientele.

At Finn McCool’s Ale House, owner Pete Sourias watched live TV coverage of Pope Francis’ visit to New York when, on a normal Friday, he would have been serving a big lunch crowd. The place was empty.

“There’s nothing we can do,” Sourias said. “I don’t like it, but I’m not going to complain about it. It’s the pope. It’s a once in a lifetime event. I hope I see him.”

On some of the roads designed as pedestrian ways during the papal weekend, the mood was festive and business was brisk after nightfall.

Additional restrictions were scheduled to go into effect Friday night.

Vehicles were not being allowed to enter a 5-square-mile area of downtown starting at 6 p.m. Friday. The Benjamin Franklin Bridge into New Jersey and 25 miles of highway were to be shut down at 10 p.m.

The restrictions are to be lifted by Monday morning.

“On Monday we’ll be back to normal,” Sourias said. “I’m not complaining, believe me. It’s great for the city.”