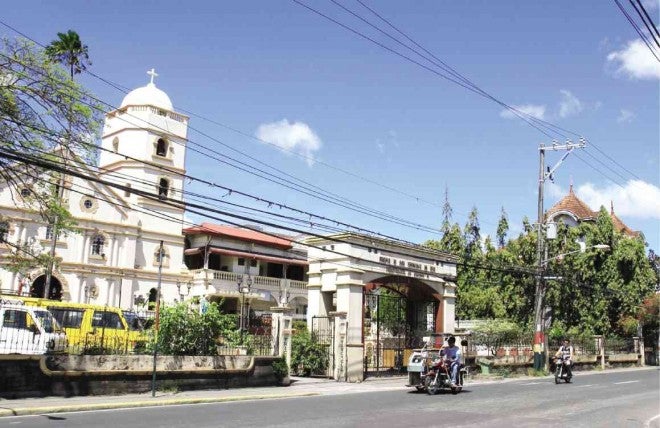 The St. Francis of Assisi Parish Church in Sariaya, Quezon

The National Commission for Culture and the Arts (NCCA) made this clear during a two-hour intense arbitration hearing it conducted last week between the Department of Public Works and Highways (DPWH) and protesting residents.

“There is no more road widening,” lawyer Trixie Cruz-Angeles, NCCA legal consultant, told the Inquirer after the hearing. She said the DPWH had come up with a revised proposal to construct three loading and unloading bays.

Wilfredo Racelis, the department’s project engineer, maintained that the revised project would not affect any heritage structure. “The excavation will be far to affect the integrity of the foundation of old houses,” he told the assembly.

Angeles urged the more than 30 residents who attended the meeting to study the new project posted on the municipal hall bulletin board and on the NCCA website. “The residents can submit a counterproposal,” she said.

The original road project aims to widen the entire one-kilometer stretch of the main road which connects to Maharlika Highway as a solution to the worsening traffic problem. But it was met with strong opposition, particularly from owners of several heritage houses along the route.

Rina Marquez, daughter of the present owner of the iconic Enriquez-Gala heritage house, submitted a petition to the NCCA asking the agency to step in to help settle the issue and save several heritage houses from defacement.

On March 18, the NCCA issued a cease-and-desist order to the DPWH project that would damage portions of the Enriquez-Gala house, municipal hall and plaza, and the St. Francis of Assisi Parish Church complex.

Under the revised road plan, loading and unloading bays will be built in three strategic spots of the main street—at a portion of the plaza in front of the church and the municipal hall, in the middle section of the town center, and in the vicinity of the public market.

The plaza and park also host another heritage structure, the Rizal Monument, which was inaugurated on Rizal Day on Dec. 30, 1924.

Marquez’s mother, Lynda, whose mansion lies in front of the plaza, said, “Where can you find a plaza with an unloading and loading station? This is a gross mistake.”

Ysmael Baysa, a finance executive of Jollibee Corp. and owner of another antique house along the main road, also voiced his opposition to the DPWH project. He insisted that the agency totally abandon the project because it would not solve the perennial traffic problem in the locality.

Instead, the DPWH should finish construction of alternative road projects, such as the 7.2-km Sariaya bypass road and the 24.7-km Quezon-Batangas ecotourism road, said Baysa, a Quezon Medalya ng Karangalan awardee in 2013.

One argued that since the road section in front of the market had already been widened, it should serve as one of the loading and unloading areas for public utility vehicles.

He said the DPWH should construct another bus stop near the cemetery instead of constructing one inside the town center. “Leave the town proper as it is,” he said.

The NCCA will hold another mediation meeting next month to find a compromise solution to the conflict. “If there will be no conciliation, we will proceed with the administrative hearing and decide the case,” she said.